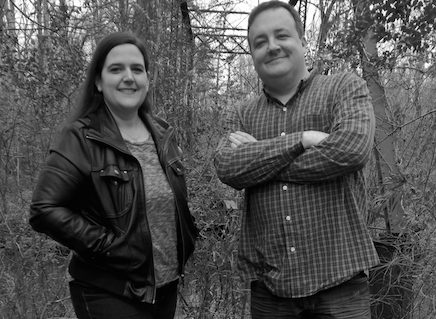 Skye Apothecary in Clanton is hosting paranormal investigator and author Kim Johnston for a ghostly discussion and book signing on Nov. 12 from 2-4 p.m. Johnston is an author of three books and has conducted many paranormal investigations across supposedly haunted locations in Central Alabama with her team Spirit Communications and Research (SCARe).

Johnston will have copies of all of her books — “Haunted Shelby County”, “Haunted Talladega County” and “Haint Blue: The Rockford Haunting”, available for purchase and guests may bring their own copies of her books to be signed as well. The discussion will be Johnston giving her accounts and stories from investigations over the last decade. However, Johnston said she wants it to be an open discussion with the guests “to allow them to ask questions and share their own experiences because this is a topic that not many people are comfortable speaking about to just anyone.”

“It can be a lonely feeling,” Johnston said. “I know from my own experience. My hope is this event gives people a chance to talk about their experiences without judgement.”

“I have been reading her books since she began writing,” Nevins said.

Nevins and Johnston became friends on Facebook, and the two coordinated the event

“I was trying not to fangirl the whole entire time,” Nevins said. “I am trying to remain professional, but I am fangirling because I am actually going to get to meet her in person, and I love her books.”

Nevins said her first job as a kid was in a library, and she is an avid reader, and “to be able to meet one of the authors I love so much is very exciting for me.”

Johnston’s interest in the paranormal began in 2008 after she and her husband purchased a home in Chelsea in Shelby County. They were the first family to live in the house, and her son, who was seven at the time, first began seeing and hearing things, then the babysitters mentioned unexplained noises.

Over the next five years, things escalated. Johnston experienced sleep paralysis, which she never had before, and the attic light began turning itself on despite the door being constantly locked and blocked off. Her middle child came to her room one night and asked Johnston if she could tell the man in her room to stop talking because she was trying to sleep.

Johnston began doing research on the area while writing her first book, Haunted Shelby County, and found that the subdivision neighborhood was built on old farmland, and two family cemeteries were found hidden in the woods just beyond the subdivision entrance. It was suspected that the cemeteries were the cause of the activity in the Johnston home.

While there is not a book dedicated to solely Chilton County spooks, Haunted Shelby County features a tale that has connections to Chilton County. Johnston’s Old May’s Plantation investigation is featured in the book, and at the end of the Civil War, a group of deserters camped around the Yellow Leaf Creek along the Shelby and Chilton County lines. They caused problems such as stealing food and supplies from nearby residents and families.

Robert Rushing, who built the Old May’s Plantation, was the leader of the home guard, and it was his job to fight these deserters and protect the locals.

“Rushing’s home guard became notorious for its violence against not only the band of deserters but against anyone they disagreed with resulting in the deaths of many innocent people,” Johnston said.

This led to Rushing being taken from his bed one night in 1865 and hung from a tree in his yard. Rushing still haunts the plantation to this day, according to Johnston.

“A lot of these people want to hype it up, and make something small that has nothing to do with the paranormal into something huge,” Nevins said. “She is just a regular, authentic and down-to-earth person. It is just the story, and she presents just the facts and the stories, and that is what I like so much about her.”

Nevins said a lot of residents in Chilton County may not be familiar with her books, and she was excited that she gets to be the person that introduces Johnston to the community.

“I like to bring new things to the community,” Nevins said. “For them to have never met her or read her books, and now I have a whole bunch of customers that have purchased her books to read them and get ready for her to come here.”