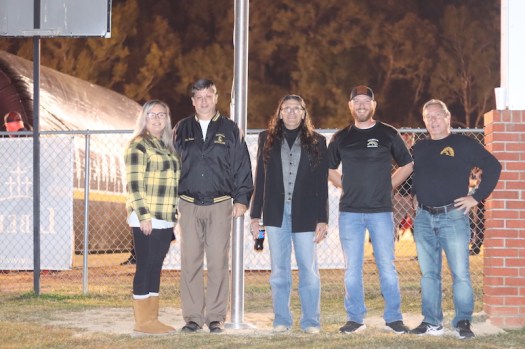 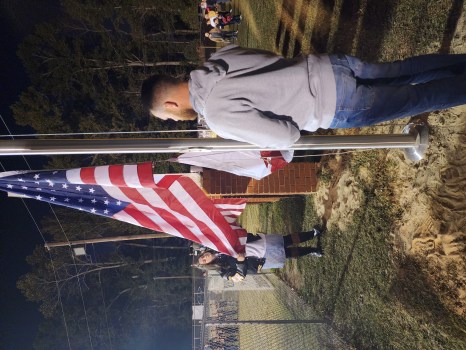 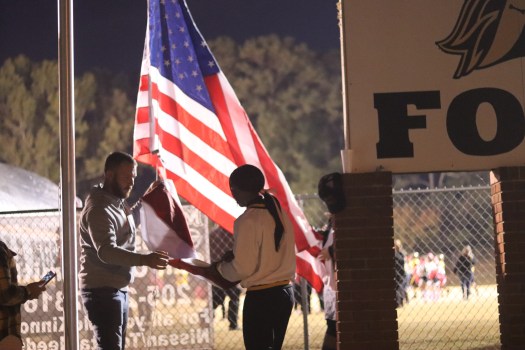 Isabella High School held a dedication ceremony for its new flagpole on Oct. 21 at the Mustang’s football game. The ceremony dedicated the flagpole to all of the former students and graduates of IHS that are presently or have served in the military.

The IHS Historical Society and leader Thomas McCall spearheaded the process of choosing the project to replace the flagpole, and the process of obtaining a grant from State Sen. April Weaver.

“The kids thought the obvious project we could do would be to replace the flagpole,” McCall said. “I really started with last year’s historical society seniors, and we had juniors who are our senior members now. They continued to pursue the project.”

They reached out to Weaver’s office to apply for an education community grant that gives back to school districts for civics projects, but they were told the deadline had passed. McCall got a call later that same day from an assistant to Weaver, and they said Weaver told them to send her all the information, and she would see what she could do.

On Aug. 22, 2022, Weaver visited IHS to present the school and the historical society a check to complete the flagpole project.

At the dedication ceremony on Oct. 21, IHS students De’Asia Wilson and Leah Turner helped raise an Alabama state flag and a United States flag onto the new flagpole. The Alabama flag was provided by Weaver’s office, and the U.S. flag was provided by U.S. Sen. Tommy Tuberville’s office in Washington D.C. The flag came with a certificate that says the flag was flown over the capitol building in D.C.

“I really wanted something special for our school, and something that this edition of the historical society could be remembered for,” McCall said.

IHS is ordering a plaque and a pedestal that will go beside the flagpole to commemorate it and the flags. That project should be complete by the end of the calendar year or the beginning of next year.

“We are really excited about it. The officers I have this year have been really instrumental in making sure that this project got done,” McCall said. “They are very active here on campus. I am just really proud of them because they let me do some background work, but they are the feet, the hands and the brains (of the operation), trust me.”

McCall and the historical society are planning a Veteran’s Day program on Nov. 10 starting a 10:30 a.m. at Isabella High School. All veterans and the public are invited to attend, and the guest speaker is Master Sgt. Jonathan Martin. Martin is a 23-year veteran of the Marine Corps, served nine tours of duty and been to 56 countries during his service time.