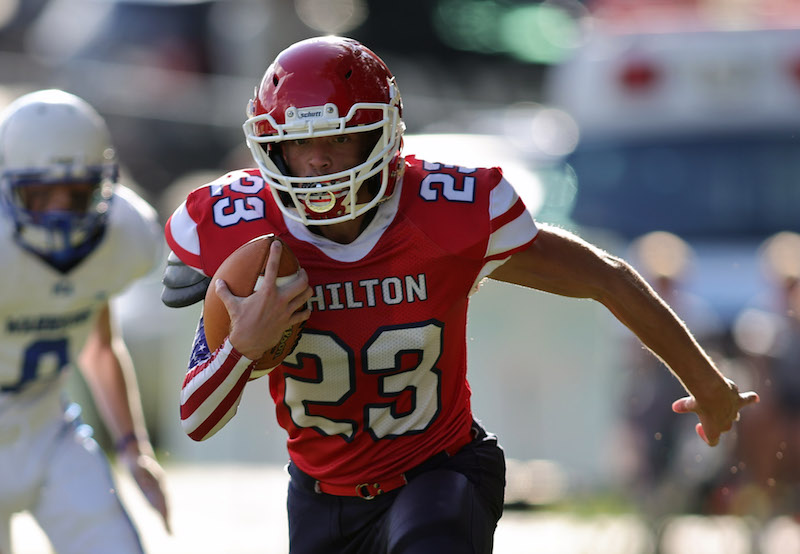 Chilton Christian Academy’s Mason McCary is this week’s athlete of the week for his six-touchdown performance in the Patriots 59-9 win over Marshall Christian Academy on Oct. 20. McCary piled up 328 all-purpose yards in the game, and 168 of those were receiving yards on six catches. McCary pulled down four touchdown passes against Marshall Christian, but he contributed heavily on the Patriot’s special teams as well.

McCary returned the opening kickoff of the game 72 yards to put CCA up by a score just a few seconds into the game. McCary sprinted for a 42-yard punt return later in the game as well, and accounted for 129 return yards overall.

CCA coach Jay Norcross said he has been trying to get the Patriots into a two-dimensional offense in both running and passing the ball. With one game left, McCary and the fellow seniors on the team made that a reality.

“All of the seniors carried everyone,” Norcross said. “I’m not going to lie I was nervous after not playing for three weeks, and I just wanted to get through that first quarter. After Mason returned the kick … things were clicking.”

McCary ran for 31 yards to bring him one yard short of 200 yards of offense on his own. He played both ways in the game recording seven tackles, one for a loss and one pass breakup.

Isabella High School running back Zac Chapman needed just one half of football to account for almost 300 total yards and three touchdowns on Oct. 21 in the Mustangs 49-14 win.

Chapman scored the fourth touchdown of the opening quarter, a 67-yard touchdown pass, in the Mustang’s 48-0 first half against Woodland High School.

Chapman continued to impose his will on the Bobcat’s defense in the second quarter with a pair of 50-yard rushing touchdowns in the last five minutes of the quarter. Chapman’s first half explosion forced a continuous running clock in the second half, and helped Isabella lock up third in the AHSAA Class 2A Region 4 standings.