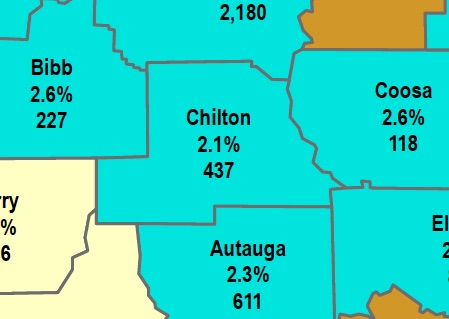 The percentage of Chilton County’s population that is employed stayed high in September.

According to data released on Oct. 21, unemployment in Chilton County decreased slightly in September to 2.1%, down from 2.3% in August. This puts Chilton as one of the counties with the third lowest unemployment rate in the state, tied with Morgan, Limestone and Blount counties.

Marshall and Cullman counties are second lowest at 2.0%, and Shelby County remains the lowest at 1.8%.

Some of the industries hiring locally included retail, finance, manufacturing’s and health services.

At the state level, unemployment also remained low, staying at 2.6%.

Gov. Kay Ivey said the state has added 50,000 new jobs since September 2021. In the past year, the state has seen an increase in employment in education and health services, professional businesses sector and manufacturing sector.

“While we are of course happy to maintain a record low unemployment rate, we’re even more pleased to announce that we are within around 10,000 jobs of beating our previously held jobs count record – set in 2019 – and we saw the largest year-over-year job growth so far in 2022. We’ve added over 50,000 jobs since this time last year, which is remarkable,” Alabama Department of Labor Secretary Fitzgerald Washington said. “For months, Alabama has been holding steady on unemployment and increasing our jobs count, and we are hopeful this positive growth will continue.”

Those looking for assistance in finding a job in Chilton County can find resources through Alabama Works at alabamaworks.com or by contacting Kelsey’s Place at 205-299-5748 or on Facebook.