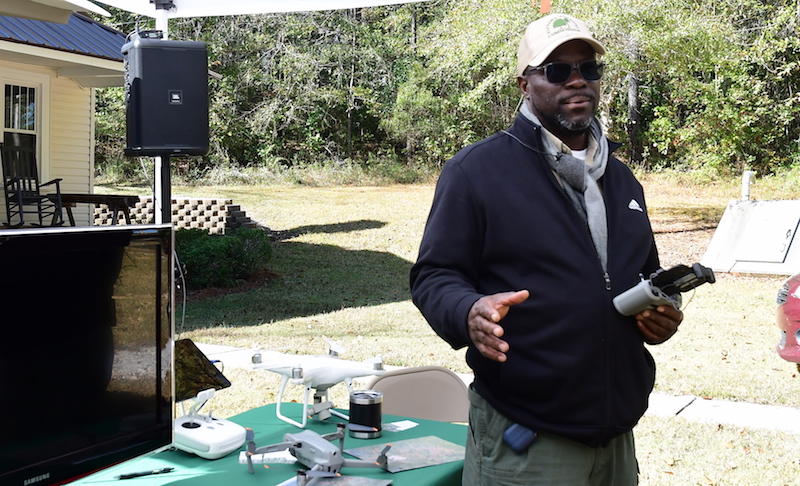 Learning how drones can assist in land management was one of the highlights for attendees at this year’s Chilton Natural Resources Council Landowner Tour in Marbury.

Kelvin Daniels, drone coordinator for the Alabama Forestry Commission, explained the ways the organization uses drones and the services offered to landowners.

At the Alabama Forestry Commission, Drones are used for controlled burns for underbrush management as well as fighting wildfires, insects and diseases.

For $150 for the first 75 acres (and $1 per acre after that), the forestry commission flies a drone with a camera on it over a person’s property to create a map. Daniels said the landowner is given a poster size image of the property as well as a thumb drive of the images that had been taken.

All of the photos are taken from 400 feet or less.

An overlay of the property boundary from GIS is used as a start, and boundaries for the images are changed as needed to get the whole property.

“It is a great management tool, especially if you know you are going to be doing some work on your property, whether clearcutting or thinning or burning,” Daniels said. “I can give you a before and after look, and you can see how well the burn or thin really took after a year or two later whenever you tell me to come back the same time (of year) I came out the first time.”

Each of the drone operators with the Alabama Forestry Commission are licensed through the FAA.

“There is a knowledge test that you have to take to get these licenses,” Daniels said.

Drones can also be flown at night. Daniels said in the past, the FAA had required a waiver to fly a drone at night. While this is no longer required, having a strobe light on the drone and a specific license for flying at night is required.

Daniels cautioned the landowners to call local law enforcement if there is a nuisance drone flying over their property, rather than simply shooting it down.

The airspace over one’s property is federally regulated, and “they consider that drone just like a manned plane,” so there are legal consequences for shooting one down, Daniels said.

Regulations limit a drone’s height of flight to 400 feet in most cases. Requirements are also being worked on that would require a remote ID on drones, so anyone near one with a cellphone could see where a drone is near them and how fast it is flying. Daniels said part of the reasoning for requiring all drones to have this ability is the desire some companies have to use them for delivering packages.

Special permission is also required when flying in controlled air space, such as near a military facility.

Daniels said technology is advancing so drones have capabilities of flying farther without losing radio signal, and cameras for the drones are also getting more detailed.

The Alabama Forestry Commission has different drones for different jobs. The largest drone is equipped with a system that holds up to 450 specialized balls for doing controlled burns for underbrush management. Other drones are used to inspect wires on radio towers.

Drones with thermal imaging capabilities are used in search and rescue operations.

Chilton Natural Resources Council is made up of representatives from a number of organizations focused on preserving the natural resources of Chilton County.