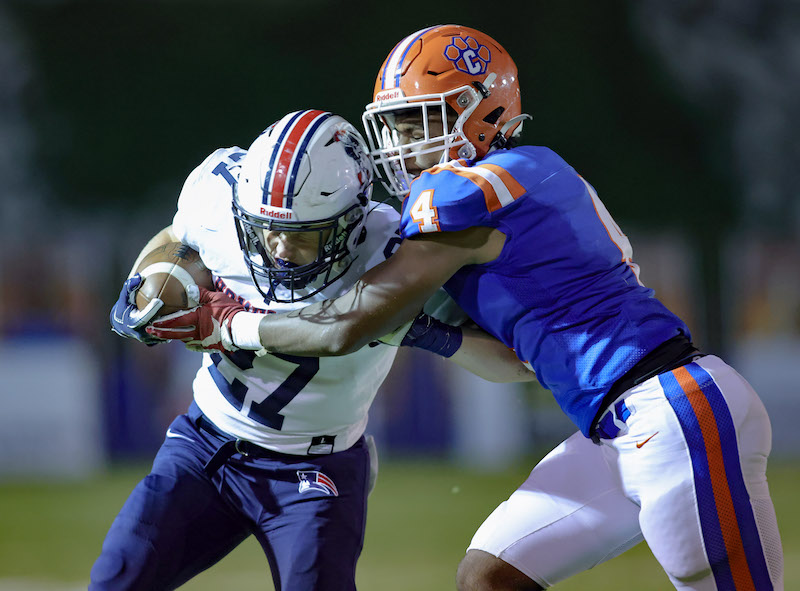 Pelham High School leaned on the arm of quarterback Clayton Mains to propel themselves to a 28-7 win over Chilton County High School on Oct. 21. Mains accounted for all four of the Panthers touchdowns in the game including two second half touchdowns that put the game out of reach.

“Tonight, we did not execute the way we should have,” Chilton County coach Marvin Morton said.

Both teams played to stalemate after the first quarter, but Mains got Pelham on the board first with a one-yard touchdown run with nine minutes left in the first half. The Tigers threatened to tie the game, but turned the ball over on downs inside the Panthers five-yard line.

Mains found Christian Johnson for a two-yard touchdown connection just before halftime to double the Panthers lead at 14-0. Mains continued his hot streak into the second half finding Kamari Hollis for a 35-yard touchdown to stretch the lead to 21-0.

Mains final touchdown came just a minute later finding Hollis again, this time from 44 yards out to make it 28-0 Panthers.

“In the second half we just did not execute our assignments,” Morton said. “They hit us with two deep balls there in the second half, and those were big parts that changed the momentum of the game.”

The Tiger’s Rashard Childers punched in a seven-yard run in the fourth quarter to cut the Pelham advantage to 28-7, but the Panthers held steady the rest of the way for their fifth win of the season.

“As long as the season is still going it gives you a chance to compete, and it shows what you are capable of doing and we try to keep that mindset that every opportunity you have to play a football game you go out there and be the best version of yourself,” Morton said. “I challenged the guys going into this last week on getting more discipline on the little things. It is a working progress when you are trying to turn things around, but we will put on a good showing (Oct. 28).”

Kickoff for both games is scheduled for 7 p.m.