Billingsley sputters on the road at Loachapoka 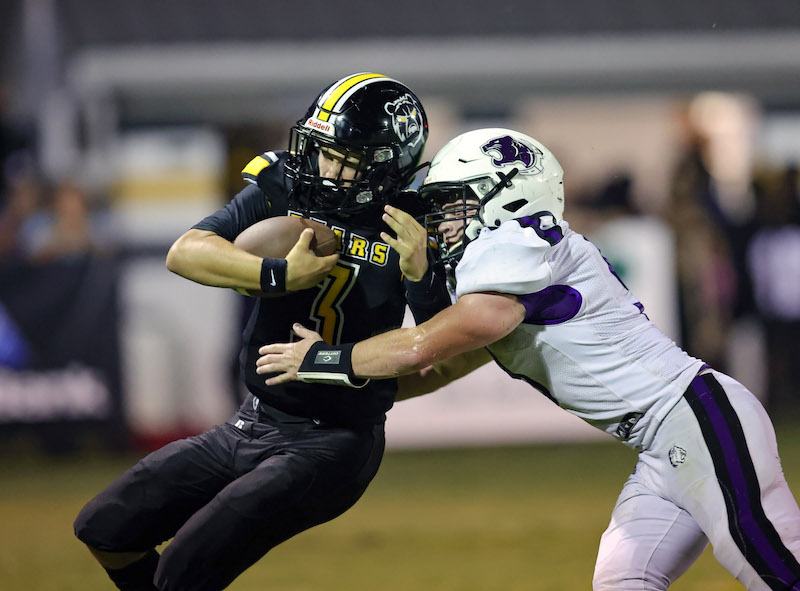 Billingsley High School lost its penultimate game of the 2022 season 40-6 to Loachapoka High School on Oct. 21. Nathan Gilmore hauled in four catches for 71 yards to lead the Billingsley offense, and quarterback Landon Jones went 11-for-18 passing for 130 yards. Jones punched in the only score for the Bears, a two-yard touchdown late in the fourth quarter.

Billingsley had a chance at a birth into the AHSAA Class 1A state playoffs with a win, but was eliminated with the loss to the Indians.

“I thought we were a little flat for what was at stake,” Billingsley coach Lanny Jones said. “(Loachapoka) was just tough to block in the run and pass game all night long.”

Loachapoka came out firing on all cylinders jumping out to a quick 20-0 lead at halftime. Jones said he told his players at halftime to limit the mistakes in the second half, and the Bears tried to get back into the game behind running back Randriquis McCary. McCary ran for 51 yards on 15 carries and caught two passes, but Billingsley only mustered 200 yards of offense in the game.

“Coming out of halftime I thought we would flip the switch a little bit, but we just never could,” Jones said. “It was just lack of execution and mistakes.”

The Billingsley defense had some standouts with Turner Motley and McCary each recording 11 tackles. McCary added a sack to his totals. Gilmore had 10 tackles.

Billingsley (3-6) takes on Thorsby High School in the Bears last game of the 2022 season. Loachapoka secured second place in the Class 1A Region 4 standings, and finished the regular season with an 8-1 record.

“At the end of the day we have a standard we are creating at Billingsley High School, and our standard is we will play hard no matter what is at stake,” Jones said. “Once we decide that is how we are going to play, you start to see good things happen for you.”