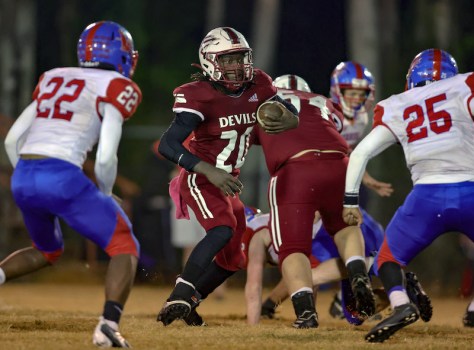 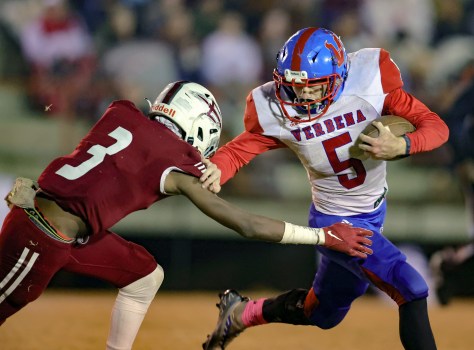 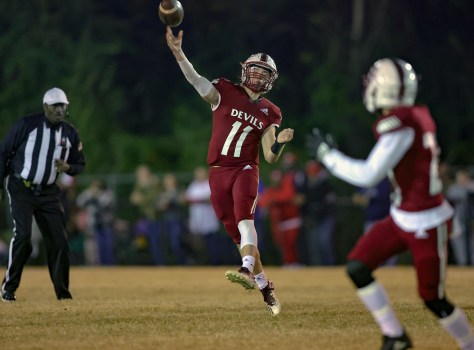 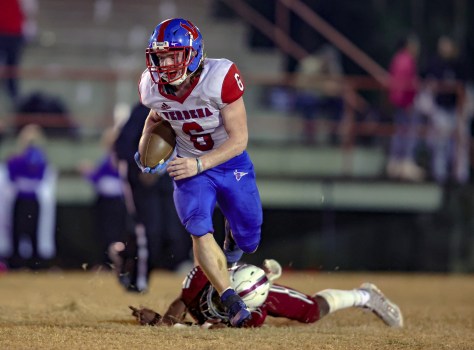 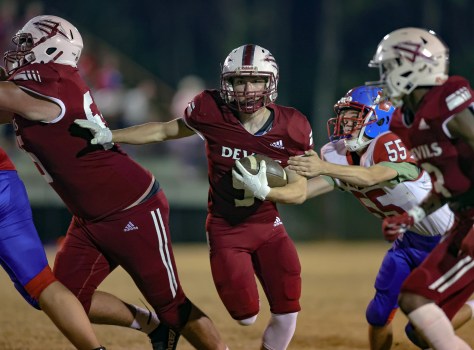 In the battle for the AHSAA Class 1A Region 4 championship, Maplesville High School came out on top with a 36-14 win over Verbena High School on Oct. 21. Maplesville scored 16 points in the final 18 seconds of the first half to jump ahead, and they never looked back.

“It is a new year, and it is exciting,” Maplesville coach Brad Abbott said. “Region championships are big … this is big for this program and these kids because they are the ones that won this one. The other ones are what other teams (in previous year) have won, this one is theirs.”

The first half of the unholy war between the two Red Devils schools lived up to its name with both teams making headway on the ground in a physical way. Maplesville took the opening possession and converted it into the game’s first points with Johnathon Wilson taking it in from three yards out. The two-point conversion attempt was no good, and Maplesville held a 6-0 lead.

Verbena took the three yards in a cloud of dust approach to their offense the first 24 minutes. Coach Allen Brothers was content with using his “bulldozer” formation, and getting short gains and keeping the ball out of the Maplesville offense’s hands.

“We were trying to limit their offensive opportunities, and it worked great the first quarter,” Verbena coach Allen Brothers said. “We have some grit, and we understand how to manage the clock … our problem was getting behind the chains, and it is tough in that offense to pick up (first downs) after getting behind them.”

Verbena’s D.J. Jackson scooped up a fumble in the backfield and got a big gain around the left side to aid the opening drive. Jarod Quinn capped the drive with a two-yard touchdown run, and Verbena’s two-point try was no good as well and the game stood tied after the first quarter.

Both teams traded punts on their next possession, and Maplesville got the ball back with under three minutes to go in the first half. Maplesville quarterback Troy McMillian completed three consecutive passes, two to Wilson and one to Payton Cook, to set them up inside the Verbena five-yard line. Bryson Pickle took in a two-yard touchdown run with 18 seconds left on the clock, and Wilson converted the two-point conversion.

“I think we started the game well and had a good game plan,” Brothers said. “You have to win all three facets when you are playing a really good team … we made too many mistakes, and our team is learning and growing, and if take those mistakes away maybe we have a shot.”

Verbena muffed the ensuing kickoff, and Maplesville recovered at the Verbena 40-yard line with nine seconds left. McMillian found Jakavion Jackson on a short route out of the backfield, and Jackson did the rest taking it 40 yards for a score with no time left on the clock, Maplesville’s second touchdown in the final 18 seconds. Wilson converted his second two-point score, and Maplesville went to the locker room up 22-6 at halftime. McMillian went 7-for-10 for 154 yards.

“Verbena is a team who is going to control the clock, and put you into some uncomfortable situations with the way they play,” Abbott said. “We knew they were going to get the ball in the second half … sometimes you just have to roll the dice, and it paid off for us.”

Maplesville carried over its momentum into the second half recovering an onside kick on the opening possession. Jakavion Jackson took in the one-yard touchdown run on the offensive drive, and the two-point conversion to push the Maplesville advantage to 30-6

D.J. Jackson responded on the ensuing Verbena possession with a five-yard touchdown run, and Jacob Morris punched in the two-point try to cut the lead to 30-14 with three minutes left in the third quarter. Morris led the Verbena defense with nine tackles joining Ethan Dopson.

However, Jakavion Jackson answered for Maplesville taking a run 52 yards for touchdown, and his second score of the night to put the finishing blow to Verbena. Jakavion Jackson ran for 135 yards on 15 carries. Maplesville’s offense outgained Verbena’s 388 to 179.

“If we can get our head back together next week, and give us a little confidence who knows,” Brothers said. “When you line up and be physical with a team, and control the number of times they get the ball you are in the ballgame.”

Cook intercepted a pass, and Wilson recovered a fumble for Maplesville in the fourth quarter.

“It has been three tough games, and we have come out on top,” Abbott said. “We definitely feel like we are playing really good right now.”

Both teams have their final regular season matchup on Oct. 28 with Maplesville (7-2) hosting John Carroll Catholic School, and Verbena (7-2) traveling to Johnson High School. Both games are scheduled for a 7 p.m. kickoff.