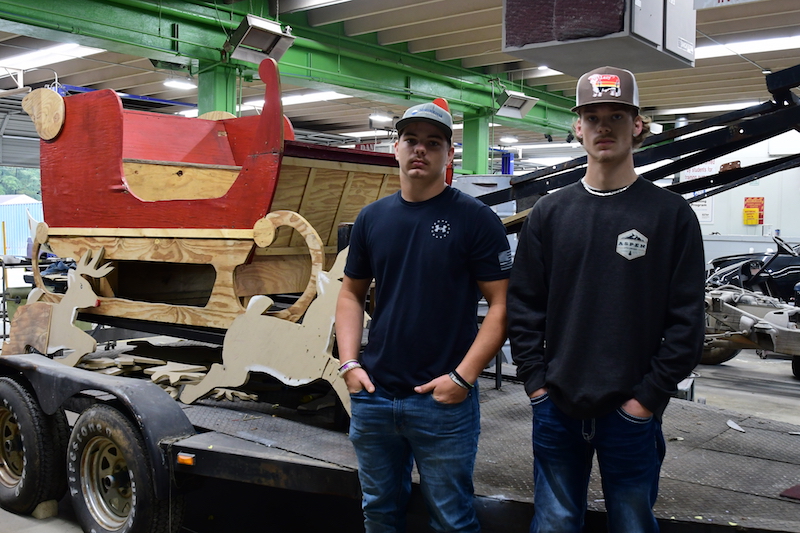 Tristan Mitchell and Judah Day were two of the Building and Construction program students who worked on fixing the Santa float. (JOYANNA LOVE | ADVERTISER)

Santa’s Clanton ride is getting an overhaul for the Christmas parade thanks to a partnership between the Rotary Club of Chilton County and LeCroy Career Technical Center.

The Rotary Club of Chilton County, which coordinates the parade each year, approached the school for help because the wood of the sleigh was showing some damage.

Students in the Building and Construction program took on replacing the rotten wood.

Judah Day, a senior in the Building and Construction program, said the class reinforced the structure, and the wings on the back of the sleigh had to be reconstructed.

“I like seeing at the end how good it looks and what it became,” Day said.

Tristan Mitchell, a senior in the Building and Construction program, worked on the trim of the sleigh.

“It was good for me using all of the skills that my teacher and my family have taught me,” Mitchell said.

His father’s career in construction is what piqued Mitchell’s interest in the building program at LeCroy.

A new paint job of the sleigh and the reindeer will be completed by the autobody students to complete the project.

Instructor Robert Pitt said fixing the float for this year gives students experience adapting in real-world repair situations because as they started working on the project the condition was worse than what it had initially seemed.

The students worked the repairs off and on for about a month, having it as a major focus for a week.

“We had a plan of action of what we were going to do, and then as we got into it the further we got along the worse it got the more rot we found,” Pitt said.

Fixing the sleigh is just a part of the partnership between Rotary and LCTC.

The LCTC team is working on plans for a new float for next year.

“They are going to come up with a design and share a couple ideas with us, and we are going to pick out the new design,” Rotarian Roger Yeargan said.

Pitts said creating a new float will involve “a lot of different trades up here at the school welding, electric, painting, building and construction.”

“It is going to be a good project for all of us to work together,” Pitt said. “It is also just something completely different.”

It is also way for students to participate in a special part of the local holiday season.

Pitt said he enjoys the “family-oriented tradition” that the Clanton Christmas parade is as well as “seeing the kid’s faces when they see Santa Claus coming down the road.”

Day said he has enjoyed seeing all of the different floats that people do at the parade in the past.