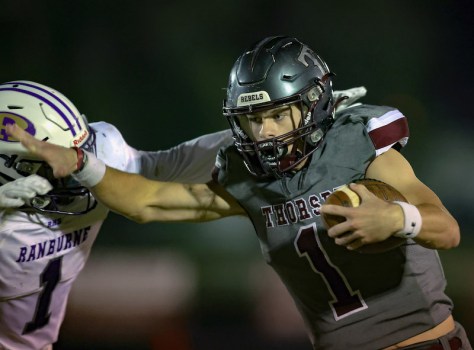 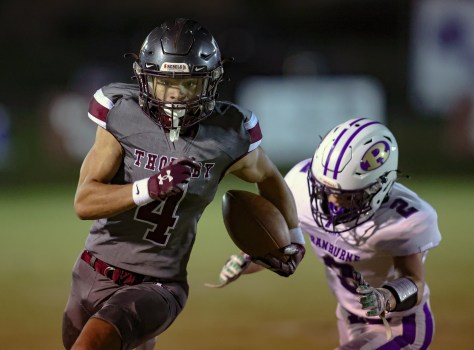 Thorsby High School made it six-straight seasons clinching a spot in the 2022 AHSAA Class 2A state playoffs narrowly beating Ranburne High School 28-21 on Oct. 14. The last six seasons equals the total amount of playoff appearances the Rebels had in program history previously, according to Alabama High School Football Historical Society.

“This is a big accomplishment for these guys,” Thorsby coach Daryl Davis said. “I told the guys they did not want to be the team left out, and they practiced well. That was the best three-win team in the state (in Ranburne), no doubt about it.”

Thorsby quarterback Remington Taylor accounted for 265 total yards for the Rebels, and the defense did enough in the second half to manage their lead.

Ranburne struck first going on top 7-0, but Taylor found Nate Thomas for a 27-yard connection and the duo connected again for the two-point conversion to take the 8-7 lead. Ranburne jumped on top again with a rushing touchdown later in the first quarter. Grayson McManus answered for Thorsby with a 17-yard touchdown run to tie the game at 14 after the first quarter. McManus ran for 38 yards on seven carries and caught three passes.

From there, the rest of the first half was all Thorsby.

“It was back-and-forth the first quarter, and we just stuck with our game plan,” Davis said. “Everything we drew up in the first half was perfect, and then they made some adjustments it was harder in the second half because of their defensive front.”

Taylor got things going with a 48-yard scamper to put the Rebels on top. Thomas added a three-yard touchdown with under a minute left in the first half to send Thorsby to halftime with a 28-14 lead.

“Our guys hung in there and played hard,” Davis said. “Our defense just buckled down and held on. It is good to get a win like that.”

Thorsby (6-2) travels to Vincent High School on Oct. 21 in the Rebels next matchup. Kickoff is scheduled for 7 p.m.