Panthers fall on homecoming to Selma 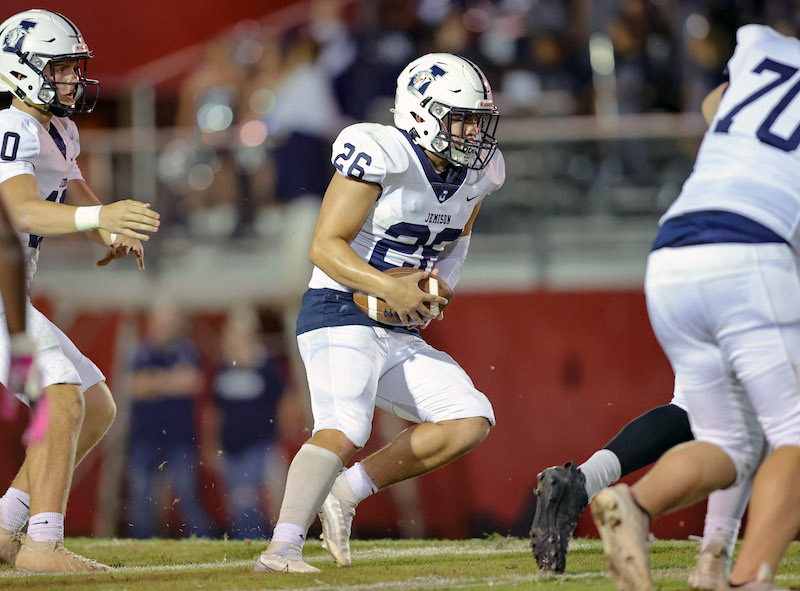 Jemison High School fell on its homecoming night 40-17 to Selma High School on Oct. 14 in the Panthers final AHSAA Class 5A Region 3 game of the season. Coden Cummings and Jaxon Padlo connected for two touchdown passes in the game.

Jemison got tricky very early as Guyton Pace recovered the onside kick on the opening kickoff. The Panthers were able to drive down inside the Selma 10-yard line, but settled for an 18-yard field goal by Juan Carlos Sanchez.

Jemison continued their hot start with Tucker Bradford stopping a Selma drive with an interception near midfield. The Panthers could not turn this good fortunate into points, and Selma scored a touchdown to give the Saints an 8-3 lead after the opening quarter.

The second quarter was all Selma jumping out to a 24-3 advantage and taking that lead into halftime. The Panther’s Padlo got Jemison back into the game finding Cummings for a long 65-yard touchdown connection. Jemison recovered their second onside kick of the game the ensuing kickoff, and the Panthers had the ball near midfield trailing by two touchdowns at 24-10.

However, Selma dashed any momentum Jemison was building and stopped the Panthers on fourth down, then marched down the field to add to their lead at 32-10 with an 18-yard touchdown run. Selma added another touchdown just after the start of the fourth quarter.

Jemison tried to get things going again with Padlo finding Bradford on a long pass to put Jemison inside the Selma red zone, but the Saints forced a missed field goal to end the threat.

Padlo and Cummings connected on their second touchdown of the game late in the fourth quarter, this one from 10 yards out to bring the final score to 40-16.

Jemison’s Josh Glass, who was taken off the field with an injury, walked out of the hospital under his own power the morning of Oct. 15. Glass had a CT scan done and suffered an injury to his vertebrate, but has movement and feeling in all of his extremities and is at home healing up, according to his father Floyd Glass’ Facebook posts.

Jemison (2-6) travels to Bearegard High School on Oct. 21 at 7 p.m. for their penultimate game of the season.