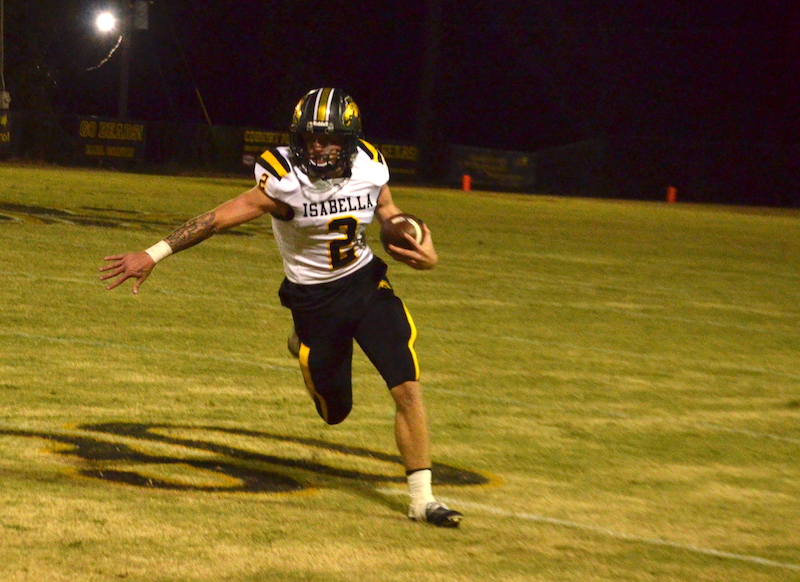 Isabella High School dropped its second game in its last three on the road at Vincent High School 49-42 on Oct. 14. While running back Zac Chapman ran for 198 yards and four touchdowns, quarterback Eli Kendrick threw for 254 yards and Isabella posted 479 yards of offense, the Mustangs had four turnovers in the game that were costly.

“I have never been prouder of a team after a loss than I was last night,” Isabella coach Tate Leonard said. “They never quit … We had guys step up everywhere. To have four turnovers and lose by a touchdown shows how hard they fought.”

Both teams traded touchdowns in the first half with Vincent holding a 21-14 lead at halftime. Chapman punched in a one-yard touchdown run, and Kendrick found Chapman for a 24-yard touchdown connection for both Mustang scores in the opening half.

Vincent scored quickly out of halftime on a 61-yard pass, and added another touchdown on a fumble return to jump out ahead 35-14. Kendrick went down with an injury in the third quarter, and Chapman moved to quarterback and took over the game.

Chapman got into the end zone for the third time midway through the third quarter on a 20-yard touchdown rush. After another Vincent touchdown, Chapman scored his fourth touchdown on a five-yard run to make it 41-28 after three quarters.

“(Chapman) just took over,” Leonard said. “Everyone stepped up around him too like the offensive line when he had to do it, but he is always a play maker for us … he refused to lose last night, and the whole team refused to lose.”

Isabella cut the lead down to one score on Chapman’s fifth touchdown of the game, a 20-yard scamper, and the lead sat at 41-35. However, Vincent returned the ensuing kickoff 66 yards to snatch the momentum back from the Mustangs.

Kendrick added a late nine-yard touchdown run in the fourth quarter after returning to the game.

“This game is only going help us, and I think it showed us that we are as good as I thought we were,” Leonard said.

Isabella (6-2) hosts Woodland High School on Oct. 21 at 7 p.m. for its last AHSAA Class 2A Region 4 game of the season. The Mustangs have already clinched a spot in the state playoffs, and sit in a tie for third place in the region with Thorsby High School. Isabella holds the head-to-head tiebreaker and would finish ahead of Thorsby if both teams finish with the same region record.

Vincent hosts Thorsby on Oct. 21 at the same time, and with a win would lock up the second seed in the region behind first-place B.B. Comer High School.