Billingsley back in win column on road at Notasulga 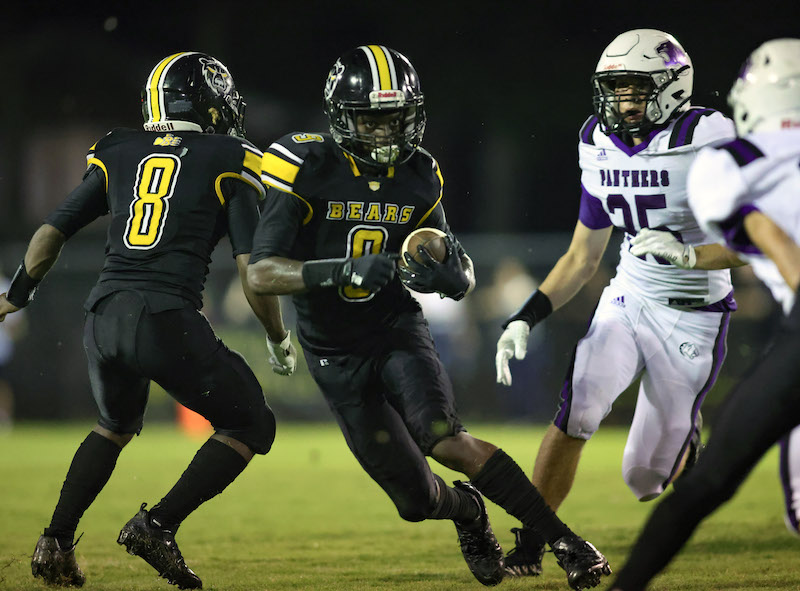 Billingsley High School got back to .500 in AHSAA Class 1A Region 4 play at 3-3 with a 28-14 win over Notasulga High School on the road on Oct. 14. Senior wide receiver Z’Londre Tyus caught two touchdown passes, and hauled in four passes for 91 yards. Bears’ quarterback London Jones went 13-for-19 passing and threw for 203 yards, and both touchdowns went to Tyus.

“For him, it has been hard to get him the ball because he gets a lot of attention, but he does his part as far as helping others get open,” Billingsley coach Lanny Jones said. “(Oct. 14) we made it our goal that we were going to make them stop him regardless.”

Billingsley went to the half trailing 14-6, but Jones said he was not worried at where the Bears were at relatively early in the game.

“We still felt really good where we were at still down 14-6 at the half, and we made our adjustments defensively … and we just played really well on offense,” Jones said. “The guys executed well, and they made plays. We challenged them at halftime to get more physical and attack the line of scrimmage.”

Billingsley got their work in on the ground as well with Randriquis McCary running for 138 yards on 23 carries and two touchdowns. Jones added 34 yards on nine carries, and the Bears accumulated 207 rushing yards as a team.

The Bears defense shut out Notasulga in the second half, and Nathan Gilmore and McCary both piled up 11 tackles each to led Billingsley. Gilmore caught five passes for 61 yards on offense. Colby Green had two sacks, and Aiden Ellis recovered a fumble.

“Overall, it was as good as I have seen us play there in the second half,” Jones said. “I feel like we always have stuff it is just the execution, and that was on point (against Notasulga).”

Billingsley (3-5, 3-3) travels to Loachapoka on Oct. 21, and still has an opportunity to get into the AHSAA Class 1A state playoffs, but needs some help. The Bears must beat the 7-1 Indians, and have Autaugaville High School (4-4, 3-3) lose to Central High School, Hayneville the same night. That scenario would put Billingsley at 4-3 in the region, and drop Autaugaville to 3-4 giving the Bears the final playoff spot in the region. If both teams win, Autaugaville holds the head-to-head tiebreaker over Billingsley.

“That is some great motivation going into this week, and we feel good about where we are at,” Jones said. “I feel like we have a shot.”