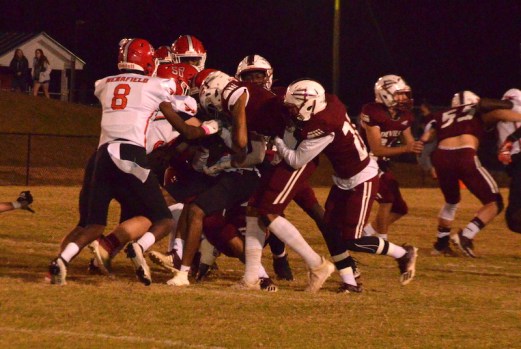 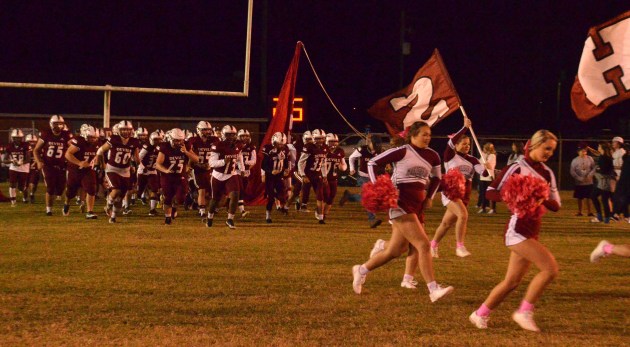 Maplesville takes the field prior to their matchup with Loachapoka. (CAREY REEDER | ADVERTISER) 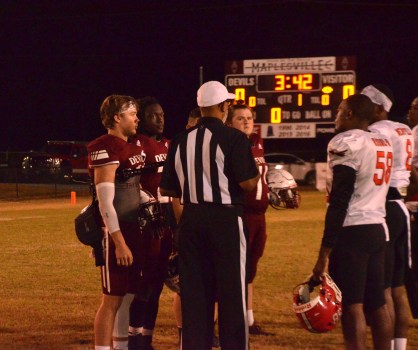 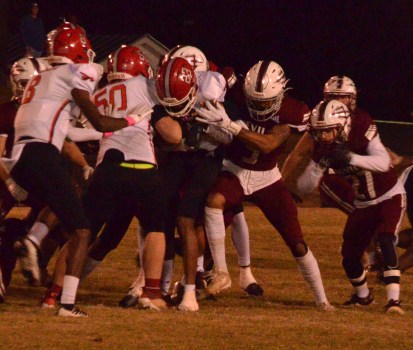 The biggest game of the season so far for the AHSAA Class 1A Region 4 schedule went to Maplesville High School after handling Loachapoka High School 38-8 at home on Oct. 14.

Red Devils running back Coleman Gill ran for 209 yards on 21 carries to lead Maplesville to the brink of the Region 4 title. Gill has been worked more into the backfield the last few weeks giving Jakavion Jackson’s ankle he tweaked more time to heal.

“We came out really solid in the first half,” Maplesville coach Brad Abbott said. “Having (Coleman Gill) back there just makes us better, and once that ankle gets ready we can put Jakavion anywhere out there.”

Loachapoka had the first opportunity to put points on the board in the first quarter with the ball inside the Maplesville red zone. However, Jackson undercut a route and intercepted the pass to end the Indians threat late in the opening quarter.

The Red Devils offense took that turnover and turned it into points 75 yards later capped by Gill getting into the end zone on a 17-yard run. Gill added the two-point conversion run to make it 8-0 Red Devils after one quarter of play.

Jackson doubled the Maplesville lead in the second quarter with a six-yard run, and adding the two-point conversion. Loachapoka, who was averaging 34.5 points per game coming into the game, looked to put points on the board getting the ball with a minute and 30 seconds left in the first half. The Indians plans were altered when Johnathon Wilson intercepted a pass and setup the Red Devils offense near midfield.

“That defense, I cannot say enough about them,” Abbott said. “They have been playing great and have so much confidence right now. I am really excited about this team and where they have gotten to at this point.”

Maplesville had less than a minute left when they got the ball back, but made use of each second. With five seconds left and the ball at the Loachapoka six-yard line, Maplesville quarterback Troy McMillian found Bryson Pickle for the short touchdown pass. Gill added his second two-point conversion run to send the Red Devils into halftime with a 24-0 lead.

Loachapoka came out in the second half and scored quickly to make it 24-8, and had the ball again inside the Maplesville 10-yard line threatening to cut the game to one score.

However, the Maplesville defense stood tall for four downs to get the ball back.

The Red Devils added two more scores in the fourth quarter, the first an 11-yard scamper by Wilson. The final blow came via Cook who intercepted the third Loachapoka pass of the game and returned it all the way for a touchdown to push the final tally to 38-8. Jackson made it four interceptions for the Maplesville defense just before the final buzzer sounded. Ensign Payne and Wilson led the Red Devil’s defense with eight tackles each.

Maplesville outgained Loachapoka 395-212, and McMillian went 6-for-11 for 118 yards and one touchdown. It was McMillian’s timing of his completions that benefitted the Red Devils the most finding receivers on crucial third and fourth down plays.

“(Loachapoka) came out fired up in the second half obviously, but we settled down and got back to what we do,” Abbot said. “Troy played big for us tonight, and his passes were right on the money. He and the receivers flipped the field position for us multiple times.”

Maplesville (6-2) will host Verbena High School on Oct. 21 at 7 p.m. with a chance to win the Class 1A Region 4 title on the line. Loachapoka (7-1) hosts Billingsley High School on the same day and time.