Verbena earns first playoff berth since 2016 with win over Calhoun 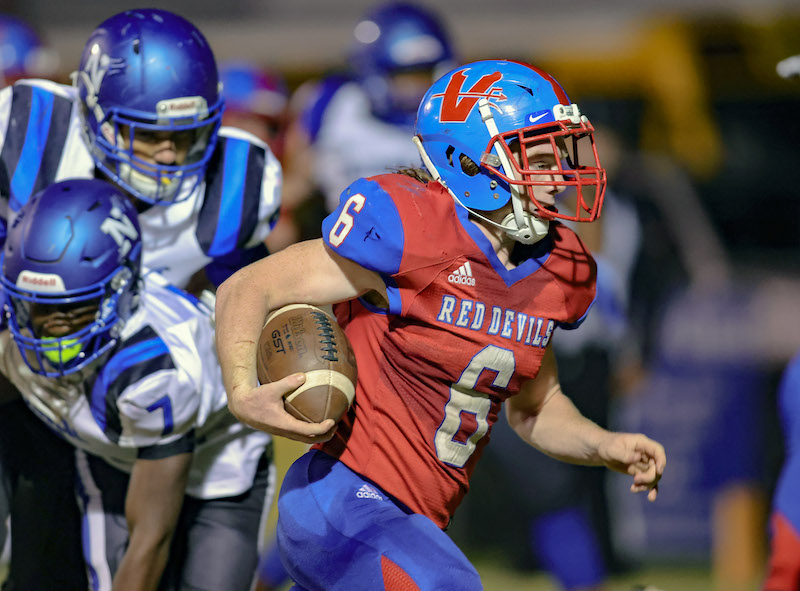 Verbena High School clinched a spot in the 2022 AHSAA Class 1A state playoffs with a 40-0 thumping of Calhoun High School on Oct. 7. Verbena exploded for 40 points in the first half, and that was all they needed to win their sixth game of the season. That is one off their total number of wins the last two seasons combined. Verbena will play playoff football for just the third time since 2007.

Verbena jumped out in front quickly 16-0 in the first quarter, and D.J. Jackson punctuated the quarter with a 28-yard touchdown run. Jarod Quinn punched in a seven-yard touchdown run, and caught the two-point conversion pass from quarterback Johnathan Marino as the Red Devils began to leave no doubt on the scoreboard. Verbena piled up 303 rushing yards, and Jackson led the way with 111 of those yards. Quinn had 96 yards on eight carries and two touchdowns, and added six tackles to lead the Red Devils defense.

“When I reflect on the season so far, I remember how bad it felt to lose, and now we know exactly what it takes to win,” Verbena assistant coach Gehrig Douglass said. “We know the preparation that is needed in practice the week before, and we know what mindset we need to go into the game with to get the win.”

One minute later, Lance Edwards scooped a fumble and rumbled 35 yards for a touchdown, and Marino found Caleb Short for a two-point conversion to stretch the advantage to 32-0. Marino was 11-for-15 passing for 87 yards, a touchdown, two interceptions and rushed for 22 yards. Tyler Kozak pulled in a touchdown catch in the game as well.

Jackson intercepted a Calhoun pass and put the Verbena offense in business near midfield halfway through the second quarter. Quinn converted the turnover into points with his second rushing touchdown of the first half, and took the two-point conversion in himself.

“It means everything to us (to make the playoffs), and it is what the kids worked so hard for and what the community has wanted to see,” Douglass said. “You have to give credit to all of our student athletes who come to work every day, and want to put in the effort.”

Verbena (6-1) hosts Autaugaville High School on Oct. 14 at 7 p.m. in the Red Devils next matchup, a battle between the third and fourth teams in the region standings.