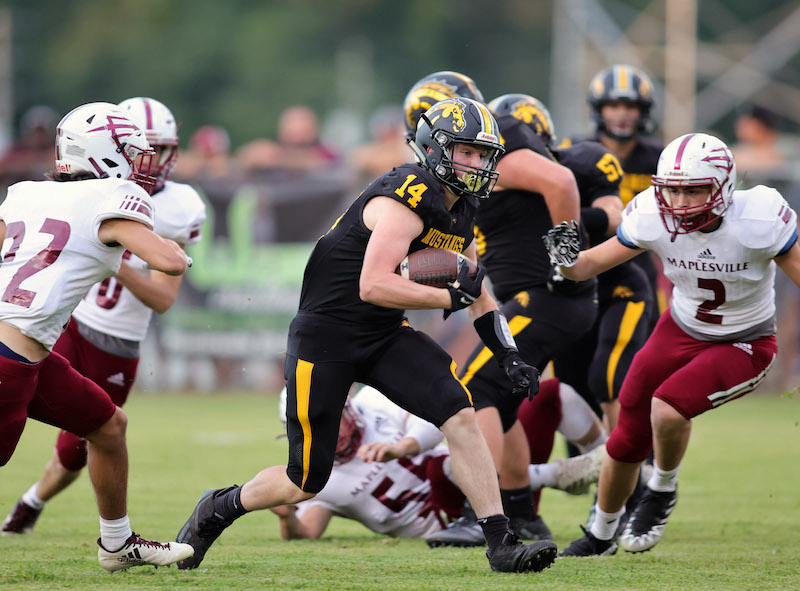 Isabella High School righted the ship after last week’s loss with a 34-7 win over Ranburne High School on Oct. 7, and locked themselves into the AHSAA Class 2A state playoffs. Running back Zac Chapman posted a 150-yard night on the ground and two touchdowns to help the Mustangs get to 6-1 on the 2022 season.

Isabella broke up the stalemate late in the first quarter when Chapman ran his first touchdown in from four yards out to make it 7-0 Isabella after the first period. DreVon Lee doubled the Mustangs lead with a six-yard run midway through the second quarter, and Isabella held a 14-0 lead at halftime. Lee grabbed a few catches in the game, and piled up 96 receiving yards. Isabella posted 249 yards rushing as a team.

“Early in the game, they were loading the box, and DreVon was catching the ball well early, and they changed some things up that opened up the running game more for us,” Isabella coach Tate Leonard said. “Our offensive line had a huge challenge, and that was one of the better defensive lines we will play all year and they did a good job.”

Much of the same presented itself in the second half with Isabella continuing to stick to the ground game. Chapman wasted little time sprinting for a 75-yard touchdown run just a minute and eight seconds out of the break to put Isabella ahead 21-0.

The Isabella defense, who gave up 52 points to B.B. Comer High School in their last game on Sept. 30, bounced back by giving up just 126 yards of total offense against Ranburne. Garrett Traywick and Colton Conway each recorded a sack for the Mustangs.

Ranburne got on the board with a short touchdown run to cut the lead to 21-7. Then, Isabella quarterback Eli Kendrick took over the game with his feet. The senior ran in a 12-yard touchdown run late in the third quarter to restore the Mustangs three touchdown lead at 28-7.

Kendrick got his second rushing touchdown in as many quarters midway through the fourth quarter on a 19-yard run. Kendrick ran for 73 yards, and went 10-for-13 through the air for 138 yards passing.

“We saw a lot of things from last week that could be easily fixed … and I thought the kids really bounced back,” Leonard said. “We played a really good team (in Ranburne) and got the win.”