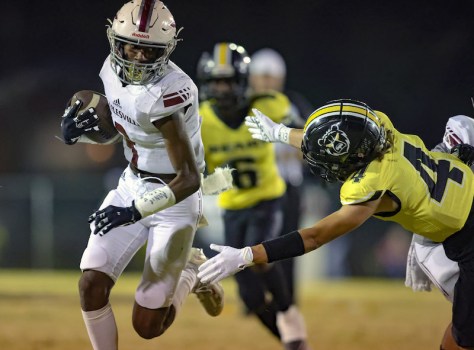 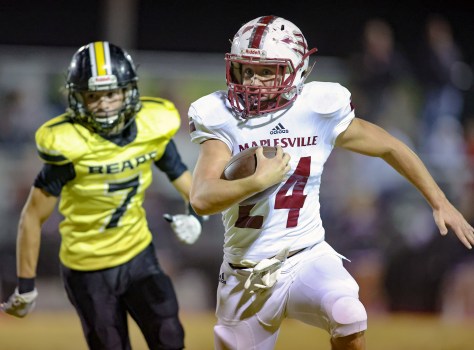 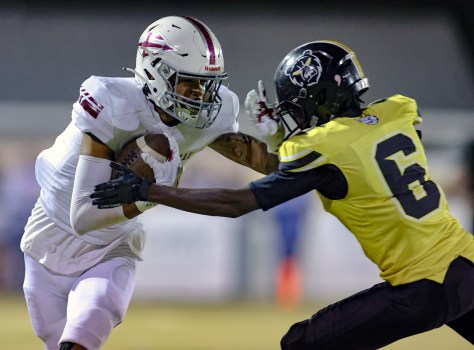 Maplesville High School locked themselves into the AHSAA Class 1A state playoffs on Oct. 7 with a 51-14 Class 1A Region 4 win over Billingsley High School. The Red Devils improved their region record to 5-0, and to a 5-2 overall record this season.

“Now you just work your way up the ladder, and every win moves you up another spot,” Maplesville coach Brad Abbott said. “It is good to get it solidified at this point in the season.”

Maplesville wasted no time jumping out to a quick 16-0 lead before the Billingsley offense could touch the field. A Coleman Gill one-yard touchdown run and a Bryson Pickle two-point conversion broke open the scoring at 8-0. Johnathon Wilson punched in an eight-yard touchdown run to double the lead.

The Bears offense moved the ball down inside the Maplesville 35-yard line on a long pass from quarterback Landon Jones to Z’Londre Tyus, but the drive stalled out just after the start of the second quarter.

The Red Devils got the ball back and marched down the field again for Gill’s second score of the game — an 18-yard touchdown pass from quarterback Troy McMillian.

On the ensuing Billingsley drive, Bears wide receiver Kyle Boice made the play of the game. Inside the Maplesville red zone, Jones rolled right and launched a pass into the back corner of the end zone. Boice pulled down the catch with a spectacular one-handed effort and got a foot in bounds to get the Bears on the scoreboard. Jones found Nathan Gilmore for the two-point conversion, and Billingsley cut the lead down to 22-8 midway through the second quarter. Jones went 12-for-22 and threw for 165 yards.

However, the rest of the first half was all Red Devils. Gill got his third score of the night on a 16-yard scamper and added a two-point conversion run. Jakavion Jackson took an interception return for a touchdown to make it 37-8. Gill ran for 101 yards on 14 carries.

Gill recovered a Billingsley fumble in Bears territory, and that set up McMillian for his second touchdown pass of the game, this one to Payton Cook to make it 43-8 going into halftime. McMillian went 6-for-10 for 113 yards and two touchdowns. Cook hauled in three catches for 81 yards.

Jackson intercepted his second pass of the first half on the last play before the intermission.

“Our offensive line gelled tonight, and I think it was their best game they have played to date,” Abbott said. “Troy threw the ball well, our receivers caught the ball well, and I thought all-in-all it was another overall solid performance in all three phases of the game.”

Billingsley showed fight coming out of halftime with Randriquis McCary taking a 48-yard run for a touchdown to make it 43-14. McCary had 161 yards rushing on 15 carries. McCary led the Bears defense with 11 tackles.

“Tonight, it was not an effort thing for us, those guys are just great at what they do, and we would have had to play perfect,” Billingsley coach Lanny Jones said. “You are at the time in the season where you can either hang your hat and look for something else to do, or continue to get better. We have a chance to get to four region wins, and we are going to keep trying to get better down the stretch.”

Maplesville’s Wilson cancelled out the score with a 35-yard touchdown run to push the final tally to 51-14. Wilson led the Maplesville defense with seven tackles, and Jackson pulled down his third interception of the game in the second half. Tyus recovered a fumble in the second half for Billingsley, and had three catches for 66 yards.

Maplesville (5-2) will now turn their attention to Loachapoka High School on Oct. 14 in a showdown for what could be the Class 1A Region 4 title. Kickoff is scheduled for 7 p.m.

“We know that every game is important, and there are no slip ups,” Abbott said of his team not looking ahead to the Loachapoka game. “You have to come out here and take care of business, and not worry about next week.”

Billingsley travels to Notasulga High School on the same day, and kickoff is at 7 p.m.