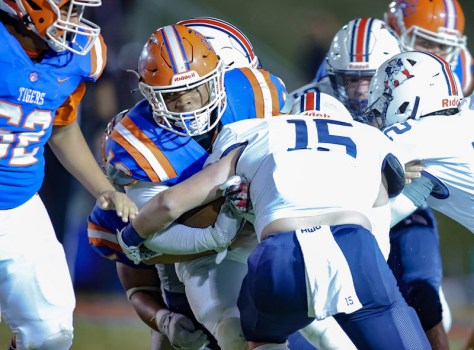 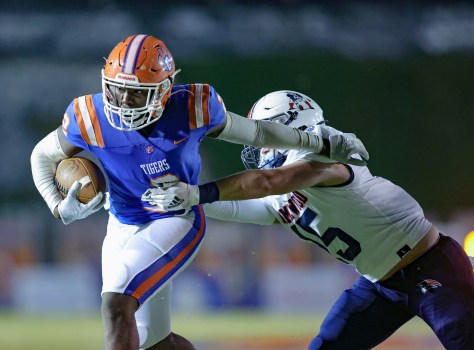 Jamon Dejarnett makes a move after hauling in a catch for the Tigers. (BRANDON SUMRALL | SPECIAL) 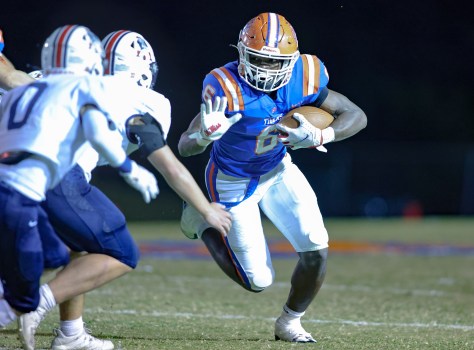 Homewood High School got the best of Chilton County High School 31-10 in the Oct. 6 AHSAA Class 6A Region 3 matchup.

The Tigers controlled much of the first 15 minutes of game action posting a 7:05 drive on their opening possession that ending with Jorge Castillo converting a 20-yard field goal to give CCHS the early 3-0 lead. Homewood responded on their first possession of the game with a short touchdown run to jump ahead 7-3 at the end of the first quarter.

When the Tiger’s offense got back on the field, runs by Demarcus Riddick and Rashard Childers helped aid a drive that put CCHS inside the Homewood red zone at the 15-yard line. On third down, quarterback Cannon Miller was picked off by Homewood’s Parker Sansing, and he returned it 90 yards for the touchdown to put the Patriots up 14-3.

A touchdown run by Homewood’s Jermald Patterson, and a 37-yard field goal as time expired in the first half sent the Tigers into halftime with a 24-3 deficit.

“We had some mistakes in the first half, and I challenged the guys at halftime that we need to come out and play with some pride, and clean up those mistakes,” CCHS coach Marvin Morton said. “I am very proud of the way they did not give up, and hoping we can build off of that.”

In the second half, Homewood scored on their opening drive to stretch their advantage to 31-3. However, the Tigers took Morton’s message to heart. Jamon Dejarnett forced a fumble on the next Patriots drive, and it was recovered by Andre Underwood to set up CCHS near midfield. Dejarnett had four catches for 70 yards on the offensive side of the ball.

Tiger’s running back Rashard Childers was a workhorse in the backfield, and continued to run hard deep into the second half. Childers converted the turnover into points with an eight-yard touchdown run just after the beginning of the fourth quarter to cut the Homewood lead to 31-10. Childers rushed for 175 yards on 33 carries and a touchdown.

Morton said he was impressed with his offensive line’s play in the game, and with the two freshman starters on the right side of the line.

“I am very proud of Rashard, he is a tough-nosed kid, and very physical running back,” Morton said. “The offensive line played probably their best game of the season … Those guys showed a lot of grit and aggression, and that is the brand of football we are trying to build here.”

The Tigers broke even with Homewood in the second half 7-7, and posted a solid defensive fourth quarter to keep the score 31-10. Riddick led the Tigers with 12 tackles, followed by D.J. Caffee with 10. Hunter Ousley added seven tackles.

“We played mistake free in the second half, and we did some things that we can build on for our next game,” Morton said.