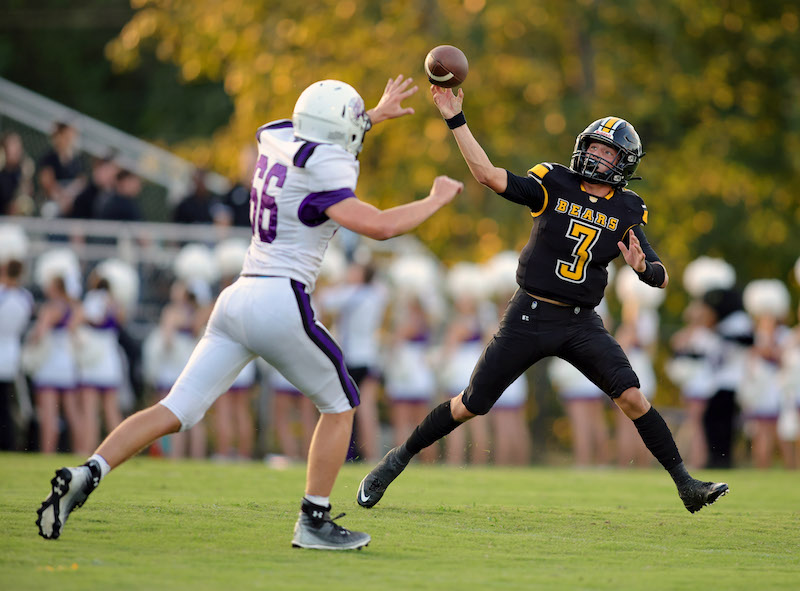 Billingsley High School quarterback Landon Jones is completing just under 70% of his throws in his first season with the program. (FILE | ADVERTISER)

Billingsley High School quarterback Landon Jones is this week’s athlete of the week for his performance in the Bears 32-30 win over Central High School, Hayneville on Sept. 30. On Billingsley’s homecoming night, Jones put together a 221-yard and two touchdown performance to break the Bears three-game skid.

It was Jones’ first homecoming game at Billingsley after enrolling at the school when his father, and Billingsley head coach, Lanny Jones took the job in July. Since then, Lanny Jones has seen Landon develop his relationships with the other players, he and the team are beginning to get into a better rhythm.

“It comes with trusting your teammates and knowing they are going where they are supposed to be, and we are picking up guys who we are supposed to be blocking,” Lanny Jones said. “He is getting more comfortable with the players.”

Billingsley has three freshmen starters up front on the offensive line. Against Hayneville, Landon Jones was pressured only a handful of times, and had a clean pocket most of the game that allowed him to find six different Bears wide receivers for catches.

“He had great time to sit back and (find receivers),” Lanny Jones said. “When he has time to let the patterns develop, he can make those throws.”

His 69% completion percentage raised his season percentage to just under 70% as well through the Bears six games this season. Lanny Jones said he was been pleased with Landon Jones’ decision making, and knowing when to make a throw or tuck it and run for a few yards. His 151 passer rating was just seven points below a perfect rating, according to the NFL model.

“Even the games where he has had pressure, his completion percentage throughout the year has been good,” Lanny Jones said. “He is really good at the pre-snap read stuff, and with our run-pass-option game, we get a lot of high percentage throws that end up being 15 yards instead of five.”

Outside of his 304-yard, three touchdown performance against Calhoun High School on Sept. 3, the Hayneville game was Jones’ best performance of the 2022 season. The sophomore added 10 tackles on defense at linebacker for the Bears.

Maplesville High School defense was a force to be reckoned with in the month of September, and the Red Devils put together arguably their best performance of the month on Sept. 30 against Autaugaville High School. Maplesville shutout the Eagles 36-0 and capped their month giving up just 14 points through the four games in September. Autaugaville was 4-1 and averaging 27.4 points per game coming into the clash with Maplesville, and both teams were sitting atop the AHSAA Class 1A Region 4 standings.

Maplesville allowed just 94 yards of total offense and forced four Autaugaville turnovers including three interceptions. Payton Cook pulled down two of the three picks. Cade Smith led the defense with four and a half tackles.

Now, Maplesville sits atop the standings tied with just one other team, the 6-0 Loachapoka High School Indians, who the Red Devils will meet on Oct. 14.