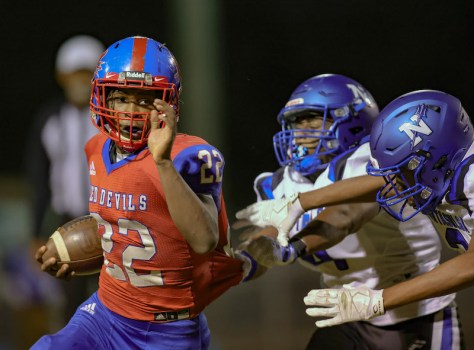 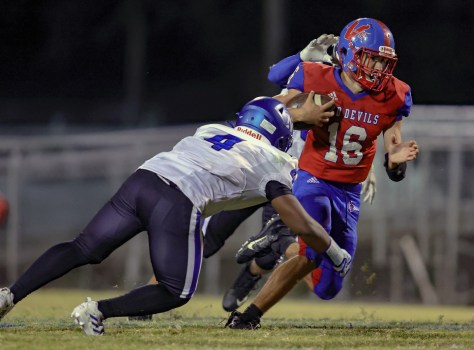 Verbena, who had not beaten the Blue Devils of Notasulga since 2009, led 22-6 at halftime. Notasulga scored first in the second half on a long touchdown pass and convert the two-point conversion to cut the Red Devils lead down to 20-14.

“All week we preached about finishing a game, and being a true contender and not someone who just wishes for it,” Verbena coach Allen Brothers said. “We held them to 14 points … In years past, we would have folded.”

From there, Jackson took over the game. He scampered for a 45-yard touchdown run the ensuing Verbena drive. Jackson added his third touchdown in the fourth quarter, a 38-yard run to push the Verbena advantage to 32-14. Jackson ran for 146 yards on 12 carries, and added five catches for 82 yards to his totals.

Jackson ended any other Blue Devil advancement in the game pulling down an interception in the fourth quarter to give Verbena its fifth win of the season.

“It is just the next game for us, that is all we keep talking about one game at a time,” Brothers said. “We still have a lot of work to do, but these guys are 5-1 for the first time in a long time.”

Verbena now sits at 3-1 in AHSAA Class 1A Region 4 play, and will try to lock themselves into the Class 1A state playoffs with a win over Calhoun High School (1-4) on Oct. 7.

After a quick Notasulga offensive possession, Verbena started the second quarter with the ball inside Blue Devil territory. Marino powered for a fourth down conversion during the nearly seven-minute drive, and Jackson got into the end zone on an eight-yard run to push the Verbena advantage to 14-6. The two-point conversion attempt was unsuccessful.

Luke Connell pulled down an interception for Verbena to set up their offense near midfield. The Red Devils added to their first half lead with a Jarod Quinn seven-yard touchdown run, and a Jacob Morris two-point conversion to send the Red Devils to the halftime break up 22-6.

Quinn recovered an onside kick for Verbena on the ensuing kickoff with under a minute left, but the Red Devil’s offense could not turn it into points.

Quinn ran for 54 yards in the game, and Morris ran for 32 yards. Verbena piled up 302 rushing yards total in the contest. Quinn led the Verbena defense with eight tackles, followed by Ethan Dopson with five tackles.

“I am super proud of them,” Brothers said. “They have a resiliency about them, and we are still figuring out how to put games away when we need to, but that is part of the process.”