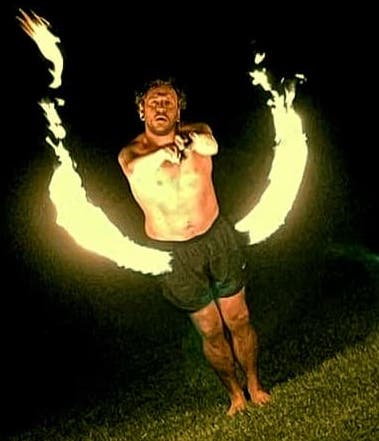 Playing with fire might be dangerous but can also be inspiring.  Joshua Holley, age 35 of Clanton, enjoys fire performing and uses fire props called “poi” to move and manipulate flames.

Poi fire performing originated from the Māori people of New Zealand, where it is still practiced today. Fundamental movements of Tai Chi are frequently used in the performer’s poise. Non-fire Poi props are also used as a health benefit for Alzheimer patients to stimulate the play-center of the patient’s brain.

“In a world where everyone has already seen everything, I enjoy seeing the wonder it creates in people’s eyes,” said Holley. “I love seeing someone’s head turn crooked or when I see a 75 year old man have a sparkle in his eyes because of what I am doing.”

Holley, initially from Cincinnati, Ohio, became interested in fire-performing while attending music events at the age of 23. As a musician, he was introduced to other fire performers that attended the events at which he was performing. He began attending fire-enthusiast meetings called “fire jams” (usually held in local parks) where other fire performers share tips and secrets of the trade.

“Fire performing fits into the music festival scene,” said Holley. “It is a cross between dance and circus performing. Most people don’t realize that fire is loud. There is a whipping sound that happens. It is a hypnotizing experience. It can be a rush.”

In 2018, Holley moved to Alabama to look for a better quality of life and freedom from substance abuse. He currently pastors Church of the Anonymous in Hoover, which is specifically geared toward people in recovery at the Birmingham Recovery Center.

“I am hoping that people find The Light in the strangest of places,” said Holley.

During performances, Holley uses odorless fire-resistant ropes that have been dipped in white gas. A performance’s location can be held indoors depending on how much floor space is available and what material the floor is made from. Performance costs usually range around $150 which covers fuel and insurance.

Joshua is married to Tiffney Holley. They are the parents of Layden, Liyonah, Sky and Ocean. 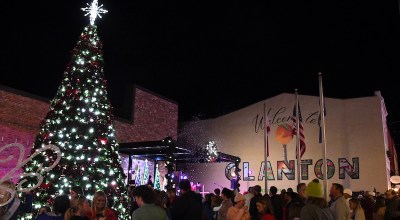 Column: Spreading Christmas cheer for all to hear