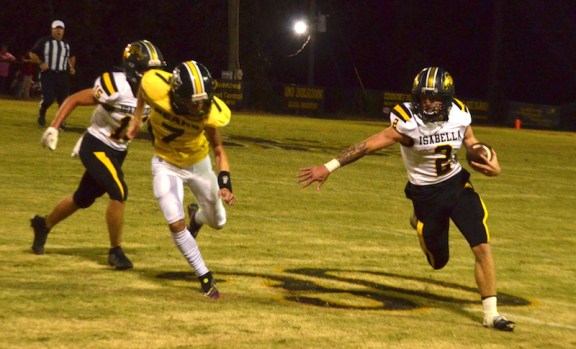 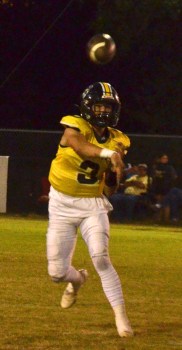 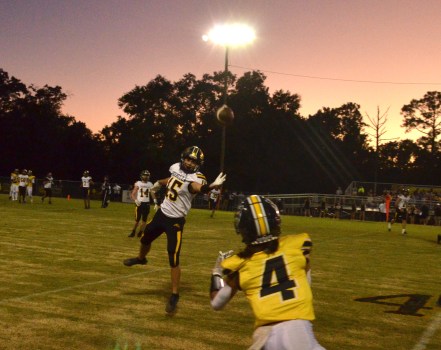 Isabella High School kept their 2022 record unblemished with a 50-14 win over Billingsley High School on the road on Sept. 23. With a massive AHSAA Class 2A Region 4 matchup next week against B.B. Comer High School looming, Isabella was not caught looking ahead.

Mustang quarterback Eli Kendrick led the charge with five touchdowns, three through the air and two on the ground. The senior went 5-for-10 for 132 yards passing and added 86 yards rushing to his totals.

“As a whole group, we are getting better and better … everyone is starting to gel together and the hard work is paying off,” Isabella coach Tate Leonard said. “The guys played good, and I am really proud of them being 5-0 at the midway point. We have some big games coming up.”

Billingsley was able to hold the Mustangs in check through the first 10 minutes of the game. Quarterback Landon Jones was able to find a receiver down the field for a big play, but the Bears could not convert that into points. The Bears halted a Mustang drive deep into their own territory with a fumble recovery.

The teams traded turnovers when Tyler Mims intercepted a tipped pass and returned it inside the Billingsley 25-yard line. Kendrick found Dawson Edwards on a nine-yard touchdown pass to open the scoring. Zac Chapman added the two-point conversion to make it 8-0.

Kendrick added to the Isabella lead just before the end of the quarter with a 62-yard connection to DreVon Lee for a touchdown, and Chapman added two-point run.

Billingsley’s Kaden Cotton ran a long touchdown in for the Bears to put the score at 14-6 after the first quarter.

The Mustangs had their way in the second quarter outscoring Billingsley 24-0. Kendrick had touchdown runs of 57 and four yards in the quarter, and converted a 30-yard touchdown connection to Lee. Lee caught four passes for 123 yards and two scores. Garrett Price scampered for a 31-yard touchdown run to put Isabella ahead 38-6 at halftime.

The Mustangs ran for 330 yards against Billingsley, and were led by Jadaiah Works who had 102 yards on 10 carries. Works put the finishing touches on the Mustangs win with a 24-yard touchdown run in the third quarter.

Z’Londre Tyus caught a touchdown pass for Billingsley in the fourth quarter, and Lejoun Laister added a two-point conversion run.

“We know what is at stake, and we have to beat them to have a chance to be region champs,” Leonard said. “It is fun because we know it will take a complete game, our best game and a lot of focus to have a chance to win. Those kind of games are fun to play.”

Billingsley (1-4) will get back to AHSAA Class 1A Region 4 play hosting Central High School, Hayneville on Sept. 30 at 7 p.m.