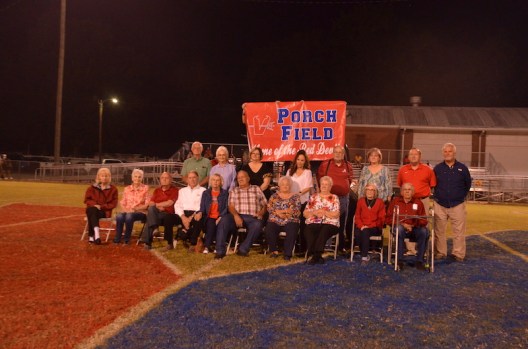 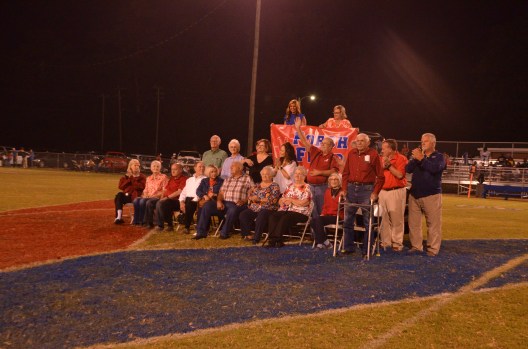 Verbena honored each of the former players, former cheerleaders and family members one at a time at halftime on the field. (CAREY REEDER | ADVERTISER)

It is always a special time when high schools recognize coaches that have made an impact on their programs. It is especially significant when the coach honored is as decorated as former Verbena High School head football coach James Porch.

Verbena dedicated its football field to Porch by naming it Porch Field at halftime of Verbena’s homecoming game on Sept. 16.

Porch coached at Verbena from 1948-1956, and compiled an 87-7-1 record, according to Alabama High School Football Historical Society. From 1950-1954, Verbena compiled five undefeated seasons and won 50 consecutive games. That 50-game win streak still stands as one of the longest in Alabama high school football history.

Former players on Porch’s Verbena teams, cheerleaders for the teams and members of Porch’s family were in attendance and recognized on the field at halftime of the game on Sept. 16.

In 1947, Verbena finished 0-10 and scored 19 points the whole season. Porch made an immediate impact on the program going 7-3 in 1948, and the Red Devils lost the first game of the 1949 season to Ramer High School. Week two was the start of the 50-game winning streak.

Verbena assistant principal Jacob Garnett said that for the school to have a dedication from the heyday of Verbena football, this season especially, was special. The Red Devils are off to their best start to a season in 16 years.

“The timing was interesting, in the middle of the best start in 16 years,” Garnett said. “It was good timing to name the field, when you think of a time that Verbena was successful and everything was flowing in the right direction. It feels like where (the program) is at now.”

Porch made an impact abroad as well, serving in World War II for five years while a coach at Oneonta High School from 1940-1947. Porch served from 1941-1945. After leaving Verbena in 1956, Porch coached one season in Georgia before retiring from the coaching ranks.

Porch compiled a 110-14-1 all-time record, according to the AHSFHS.