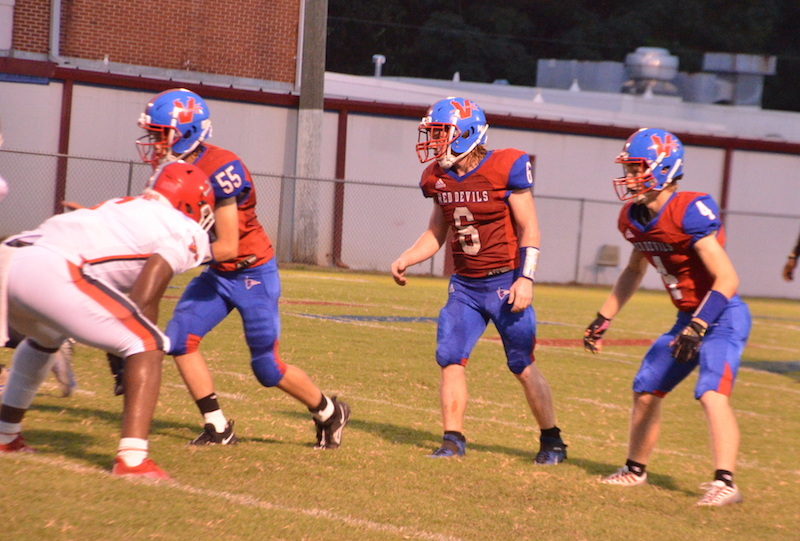 Jacob Morris is this week’s athlete of the week for his performance against Central High School, Hayneville on Sept. 16.

Verbena High School ran for 439 yards against Central, and Morris accounted for 209 of those himself. Morris compiled those yards on 19 carries, that averages out to 11 yards per carry and punched in three touchdown runs.

“He had a phenomenal game, and he has really turned out to be our best inside runner,” Verbena head coach Allen Brothers said. “He does a really good job in our power set when we need short yardage, and it is a pretty physical type of football and hard to do all of the time in every game.”

Verbena held a 34-14 lead after three quarters. Central converted a trio of rushing touchdowns in the final quarter to send the game into overtime.

“I told them they worked too hard for this,” Brothers said. “They just needed to get back to what they were good at, and that is being physical.”

In overtime, Central got the ball first and was able to score to take their first lead of the game at 40-34. The Lions elected to go for the two-point conversion, but the Verbena defense stood tall to stuff the conversion and keep it a six-point game.

Morris played almost every snap against Central playing linebacker on defense, and rotated into the backfield for the Red Devils throughout the game. He recorded eight tackles on defense, and five of those were solo tackles.

With the ball at the 10-yard line and four plays to tie the game, Morris pushed his third touchdown of the game across with a seven-yard run to tie the game at 40. The Red Devils elected to go for the two-point conversion, and the win.

The call was to Morris, and after no daylight up the middle, he bounced the run outside to the right side and broke the boundary to give Verbena the 42-40 win.

“I told them they had no excuse to not get physical for a few plays, and if we get it in we will score the two-point conversion,” Brothers said. “Jacob told me ‘Coach, there will be no doubt. I will get it in,’ and he did.”

Morris has had three games of 100 rushing yards or more this season, and he has led Verbena to its best start since 2006 when they started 6-0 that season. The Red Devils made the state playoffs that season. Verbena sits in fourth place in the AHSAA Class 1A Region 4 standings currently, which would put them into the playoffs this season heading into their bye week.