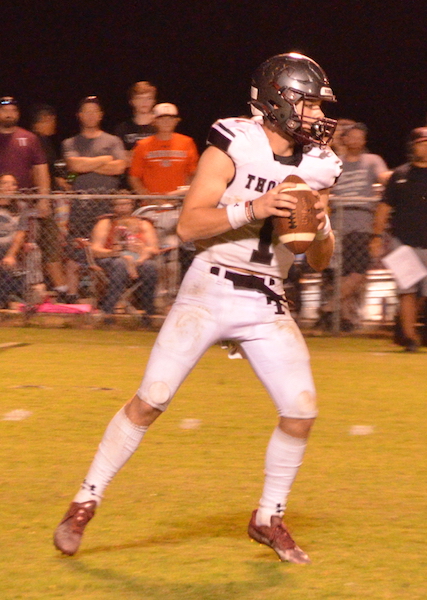 Thorsby High School sits 4-1 on the 2022 season after a 48-0 win over Central of Coosa County High School. (FILE | ADVERTISER)

Thorsby High School put together their best offensive showing of the 2022 season against Central of Coosa County High School in route to a 48-0 win on Sept. 16.

It was Thorsby’s homecoming night, and the Rebels held an 8-0 lead after the first quarter. However, the Rebels left no doubt for the returning alumni and fans rattling off 24 points in the second quarter.

Taylor rans for 86 yards on eight carries and one touchdown, and threw for 68 yards and a touchdown.

“That second quarter the defense settled in, and we got the ball several times and executed,” Thorsby coach Daryl Davis said. “The defense played well, and we were able to play a bunch of guys, and they played well too.”

The Rebels defense allowed little advancement throughout the game, and was led by Malachi Allgood with 11 tackles. Johnavin Brandenburg and Josh Daniel added nine and eight tackles, respectively.

McManus continued to dominate the quarter with a five-yard touchdown run, and a 50-yard touchdown pass to Carson Church just before halftime. Christian Davenport and Taylor added two-point conversion runs after each of the touchdowns to put Thorsby ahead 32-0 at the intermission.

McManus went 5-for-7 and threw for 84 yards and a touchdown. He added 41 rushing yards on 10 carries and two touchdowns to his totals on the ground.

“It is nice to see who is going to step up each night, and Grayson had a pretty good night,” Davis said. “It was good to spread it around, and he did a good job.”

McManus got the Rebels back on the board finding Church for an 11-yard touchdown connection just before the end of the quarter. McManus then tossed to Luke Turner for the two-point conversion to make it 40-0 after three quarter.

Church hauled in three catches for 73 yards and two touchdowns.

Travis McKee put the last blow to Central Coosa with a 12-yard run in the fourth quarter. McKee ran for 28 yards on three carries.

Thorsby (4-1) travels to Fayetteville High School on Sept. 29 for the Rebels next AHSAA Class 2A Region 4 matchup at 7 p.m.