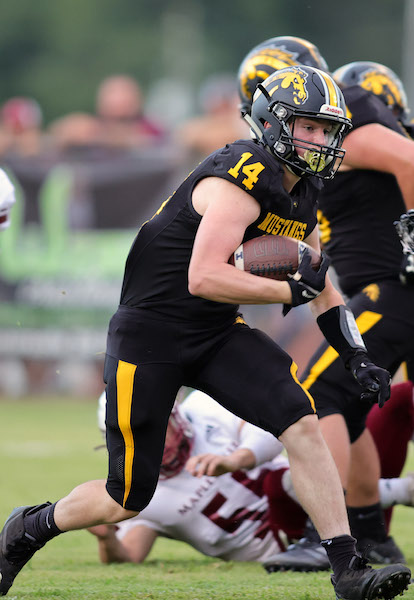 Isabella High School added to their unblemished record with a 59-21 win over Fayetteville High School on Sept. 16. The Mustangs celebrated their homecoming night to the tune of 347 rushing yards, and four running backs rushing for 50 yards or more.

Jadaiah Works led the four backs with 106 yards, followed by Zac Chapman with 76 yards. Chapman got into the end zone five times in the game, three times on the ground with runs of 26 yards, 20 yards and one yard. He added a 55-yard punt return for a touchdown, and a 44-yard touchdown reception from quarterback Eli Kendrick.

“The offensive line is doing well, but there is still some room for growth being young and not having a lot of depth” Isabella coach Tate Leonard said. “I am pleased though with how young we are and where we are at, we just need to keep getting better.”

Kendrick ran for 72 yards from the quarterback position including a 62-yard touchdown run late in the fourth quarter. The last Mustang rusher to go for 50 yards was DreVon Lee who hit the number squarely. Lee added a four-yard touchdown run in the second quarter to his totals.

Leonard rotated in some of the younger players in the second half, and he said he was pleased with how they played.

“We like to share the ball and get the ball into multiple people’s hands,” Leonard said “That has been something we have tried to do since I have been here.”

Austin Porter took a 23-yard run for a touchdown in the second half to punctuate the Mustangs third AHSAA Class 2A Region 4 win of the season.

Colton Conway had an interception for the Isabella defense.