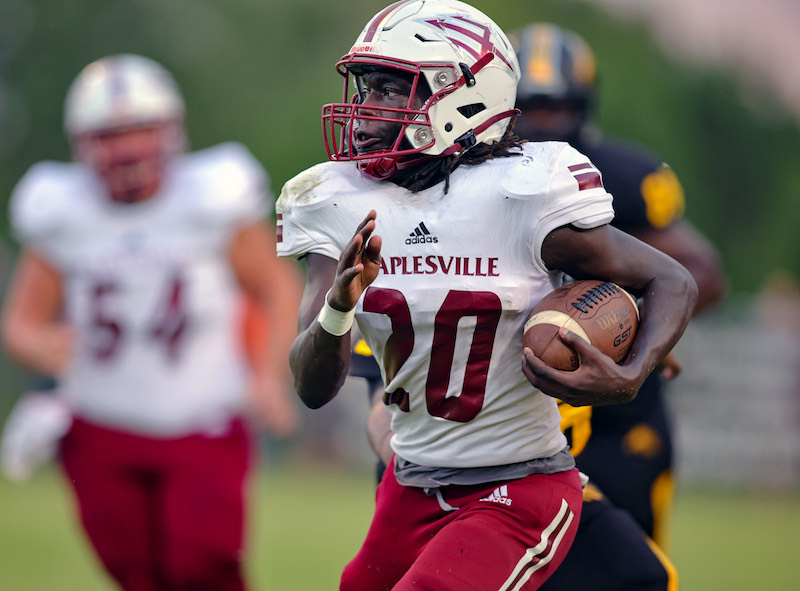 After its first four games of the 2022 season on the road, Maplesville High School thumped Calhoun High School 56-0 in their first home game of the year on Sept. 16.

The Red Devils split their first four games of the season on the road, but now sit 3-2 on the season, and 3-0 in AHSAA Class 1A Region 4 play.

“All and all, that was a great overall team effort,” Maplesville head coach Brad Abbott said. “Special teams, offense and defense all played really well for us.”

The first Maplesville drive stalled out, and Calhoun was set on taking every second of the play clock away from the Red Devils they could. However, after their first drive ended with no points, it was all Maplesville the rest of the way.

Johnathon Wilson got into the end zone four times against Calhoun. On Maplesville’s homecoming night, Wilson thrilled the crowd with a pair of punt return touchdowns in the first half. He added two rushing touchdowns as well, and Maplesville went to the intermission with a 42-0 lead over Calhoun.

While their first game in front of the home fans went without a hitch, it took some adjusting for Abbott and his players to be playing in the friendly confines of Maplesville.

“It was a little different. We got done eating our pregame meal, and it was like we did not have to rush,” Abbott said. “It was really nice to just to be here, and get this first home win. It was definitely a long time and felt a little weird.”

Maplesville’s Jakavion Jackson added two touchdowns in the game. Coleman Gill put the finishing touches on the Maplesville win with a short touchdown run late in the game.

Maplesville (3-2) will host Autaugaville High School on Sept. 30 at 7 p.m. in their next game. That matchup is a Class 1A Region 4 game, and Autaugaville is coming off a 49-6 win over Billingsley High School