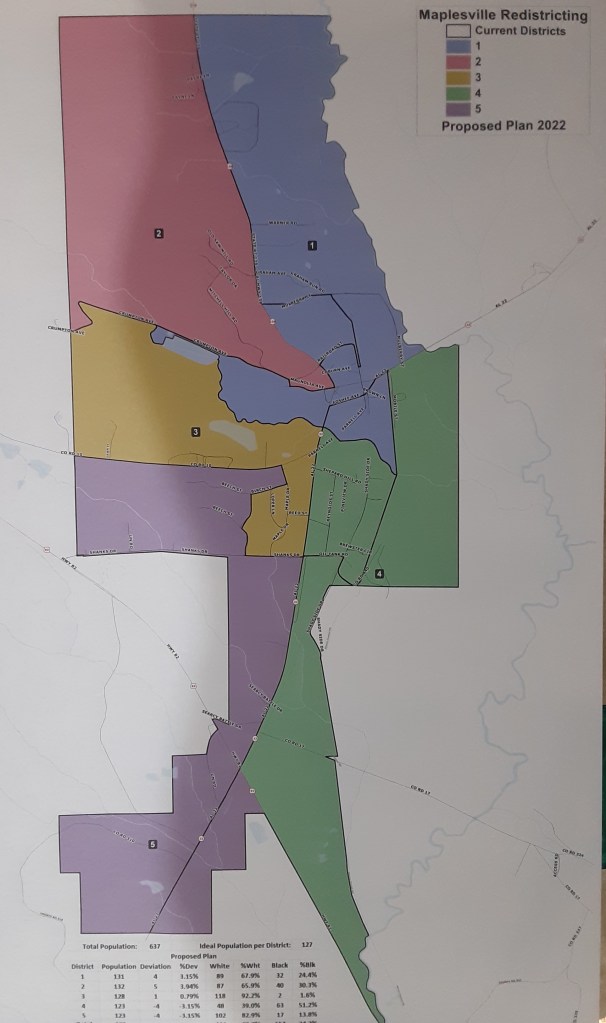 This is a map of the new Maplesville Town Council district boundaries. (MAP BY ASU)

The Maplesville Town Council has approved a new district map to meet requirements after population changes were reflected in the 2020 census.

The 2020 census showed a decrease in population to 637 people.

The new map was approved on Sept. 12 after a public hearing where the map was displayed, and the public had the chance to ask questions.

Louis Hines of Alabama State University’s demographics research services worked with the council to ensure that each of the districts had a population that was within 5% of each other.

Hines said the biggest changes were in Districts 1 and 4, but all of the districts had some change.

The updated map can be viewed at the Maplesville Town Hall.

The council also approved spending up to $6,000 to purchase trash cans currently in use by town residents from LDI as the contract with the company ends. The cans will then be given to the residents that had been using them. New garage customers would need to provide their own can.

Disabled American Veterans Chapter 33 commander Barbara White presented resources that are available to local veterans. Several flyers and business cards were given to the mayor and council to be given out to veterans interested in the services offered. Information was also presented on the application process for the National Cemetery. White said she is in her office in downtown Clanton on Tuesday and Thursday 9:30 a.m. to 12:30 p.m. at 504 First Avenue N in Clanton to assist veterans.