Veterans honored with Quilts of Valor 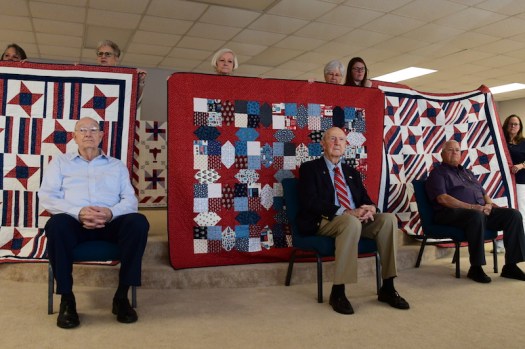 Gordon Smelley of Clanton, George Walker Jr. of Maplesville Hershel Smith of Thorsby sit in front of their Quilts of Valor being held by the Cotton Patch Quilters. (JOYANNA LOVE | ADVERTISER) 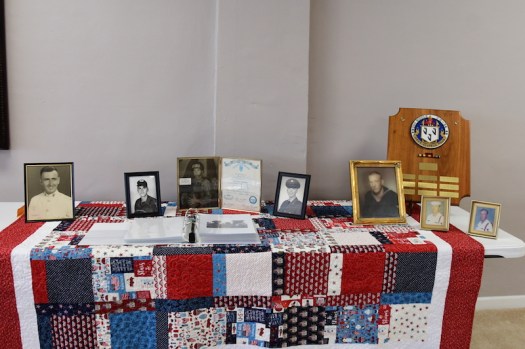 Mementos from the veterans’ service were on display. (JOYANNA LOVE | ADVERTISER) 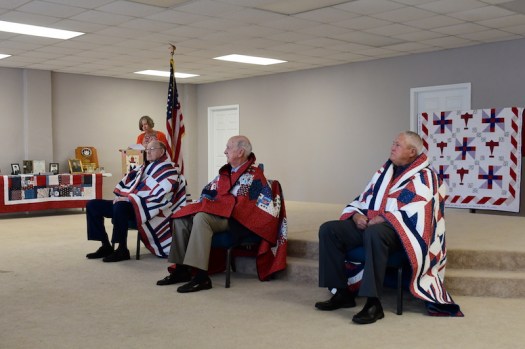 Gordon Smelley of Clanton, George Walker Jr. of Maplesville Hershel Smith of Thorsby were wrapped in their Quilts of Valor during the ceremony. (JOYANNA LOVE | ADVERTISER)

The Cotton Patch Quilters of Clanton honored three veterans with a Quilt of Valor during a Sept. 8 ceremony.

George Walker Jr. of Maplesville, Gordon Smelley of Clanton and Hershel Smith of Thorsby, were honored in this inaugural Quilts of Valor project for the group.

Janet McDonald of the Birmingham Quilters Guild, who helped the Cotton Patch Quilters develop the Quilts of Valor patterns, led the presentation.

“We consider it a privilege to honor you,” McDonald said. “Though we may never know the extent of your sacrifice and service to protect and defend the United States of America, as an expression of our gratitude, we award you this Quilt of Valor.”

Walker has 41 years of military service spanning from the years of the Korean conflict to the fall of the Berlin Wall.

“Walker served as an officer in the United States Marine Corps from 1950 to 1956 achieving the rank of captain,” McDonald said.

He then served in the U.S. Army National Guard while he was principal of Maplesville High School.

He held several leadership positions throughout his military career.

“I’m really speechless,” Walker, who is 91 years old, said. “I feel like I am the luckiest man in the world … I came from such humble beginnings.”

He said “it is just hard to believe that I am sitting here with a rank of Lieutenant Colonel” and all the years he was able to serve as MHS principal.

“I am just so lucky that I have been here in such a beautiful place and to be surrounded by a bunch of beautiful people,” Walker said.

He then thanked the quilters for the recognition.

Smelley served in the U.S. Navy from August 1957 to February 1978. He was a boiler technician petty officer and served 15 years of active duty, receiving the National Defense Medal, Navy Achievement Medal and the Navy Good Conduct Medal with devices.

“I was glad that I was able to do it,” Smelley said.

He recognized his wife for her support in “always being there for me when I needed someone to lean on.”

Smith served in the U.S. Army on active duty from April 1965 to April 1968. He reached the rank of sergeant before transitioning to the Army Reserves until April 1971.

“Sergeant Smith served a 12-month combat tour in South Vietnam from June 1966 through June of 1967 and received the Bronze Star with Valor device for his display of aggressiveness, devotion to duty and personal bravery,” McDonald said. “… Along with his combat experiences, Sergeant Smith was unconscious for nine days due to malaria while in Vietnam and is considered a 100% service connected Disabled Veteran having suffered a severe fall while deployed to South Vietnam.”

The Quilts of Valor Foundation was started to honor veterans for their service and bravery with a symbol of peace, comfort and healing.

“A quilt consists of three layers held together by its quilting stitches,” McDonald said. “We like to think of the layers in this way. The top of the quilt with its many colors and shapes and fabrics represents the communities and the many individuals we are. The batting or filler is the center of the quilt. It represents our hope that this quilt will bring warmth, comfort, peace and healing to the individual who receives it. The backing is the strength that support the other layers.”

The backing is symbolic of those who come alongside the veteran to support them. The stitching represents “love and gratitude,” McDonald said.

Many family members and friends of the veterans were in attendance at the ceremony.