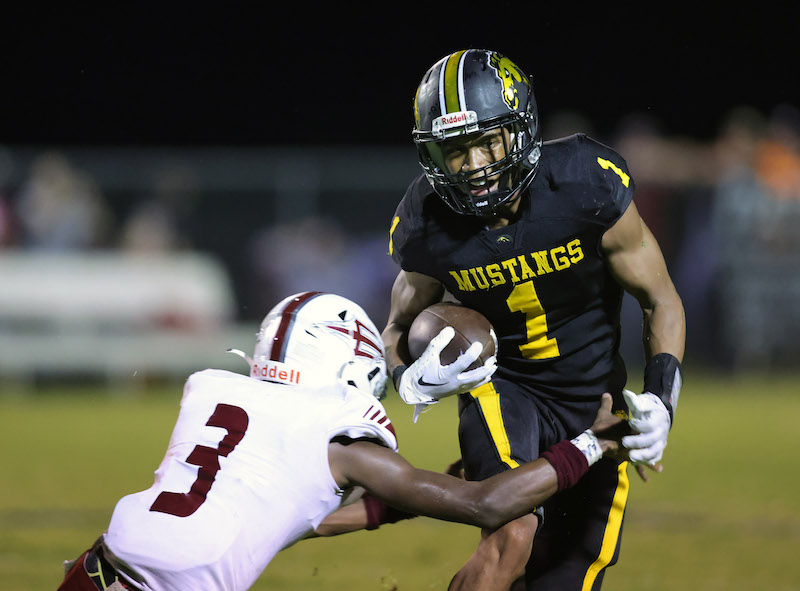 Isabella High School remained perfect on the season with a 65-24 thumping of Central of Coosa County High School on the road on Sept. 8.

Bad weather expected on Sept. 9 forced the game to be played the day before, but Isabella was not as lucky. The Mustangs endured a delay after the first quarter for lightning, and after halftime the rain was coming down in buckets.

The change of schedule put the Mustangs behind after head coach Tate Leonard gave the team Monday off not expecting the game to be played on Thursday. Isabella had just two days of practice this week.

“It was kind of a rush trying to get everything in this week, but I thought our guys did well with adjusting,” Leonard said. “They did well dealing with the adversity. It is good to have a game like that.”

After the lightning delay, the Mustangs and Kendrick picked up right where they left off scoring twice in the first minute of the second quarter. Kendrick scored an 18-yard run for a touchdown, and Works added a two-yard touchdown run to make it 37 points in just over a quarter of play.

“With the competition we had earlier in the season, we knew we had to be good quick, and that puts a lot of pressure on you in the offseason to make sure you get ready,” Leonard said. “Them battling and getting better day by day … Everything is rolling right now we just have to keep it that way, and keep getting better.”

Running back Zac Chapman had two rushing touchdowns before halftime, one from two yards out and one for four yards. Chapman had 137 yards rushing, and 73 yards receiving in the first half of play.

Kendrick found Tyler Mims for a 17-yard score to end his night. Kendrick, Chapman and other Mustang starters did not play in the second half.

Garrett Price had 59 yards rushing in the second half, and Braxton Mims punched in a rushing touchdown late in the fourth quarter to make it 65-24.

Isabella (3-0) will look to remain perfect against Fayetteville High School on Sept. 16 at 7 p.m. in the Mustangs next matchup.