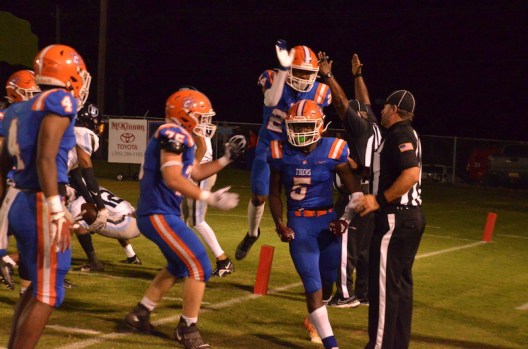 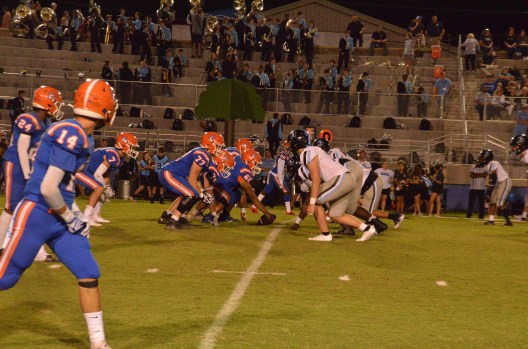 Chilton County and Helena before the snap. (CAREY REEDER | ADVERTISER) 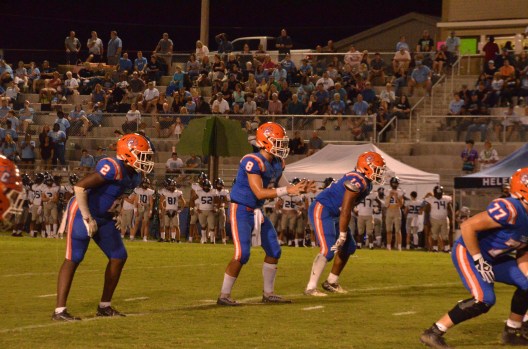 Chilton County High School was ahead of Helena High School 28-9 at halftime in the two AHSAA Class 6A Region 3 foes matchup on Sept. 8. In the second half, Helena scored 26 unanswered points and held CCHS scoreless to prevail 35-28 in overtime.

“We had some mental errors that were tough,” CCHS coach Marvin Morton said. “Those guys played hard. Helena played ball in the second half.”

Huskies coach Richie Busby’s message to the team at halftime was short, but made an impact.

“The biggest thing we told them was if you do not think you can win, do not come back on the field,” Busby said. “This is my fifth season, and we have had some really great comebacks in our time, and our kids have so much guts.”

While the Huskies scored 26 points in the second half and overtime, they did not get on the board after halftime until a minute left in the third quarter. Quarterback Dalton Lewellyn found Daunte Cave for a 43-yard connection to make it 28-17 after the two-point conversion.

Huskies running back A.J. Horstead punched in a two-yard touchdown run in with eight minutes left in the game to cut the Tigers lead to just three at 28-25 after the two-point conversion.

Helena got the ball back with five minutes left in the game and managed to get to the Tigers five-yard line before the drive stalled out. The Huskies converted on a 22-yard field goal to tie the game at 28 and force overtime.

In overtime, Horstead needed just two plays to get in the end zone for a six-yard touchdown run to put Helena ahead for the first time since it was 9-7 in the first quarter.

“It was a great team effort in the second half,” Busby said. “The biggest thing was our kids continuing to believe in themselves, and the life lesson is you are never out until you believe you are out.”

CCHS got the ball for their opportunity to score and pulled out the double pass on their first play. The Huskies undercut the route and intercepted the ball to end the game.

Busby was pleased with his team’s effort in the second half, but wants to see Helena fix the mental mistakes that plagued them in the first half and put them in the 28-9 hole.

In the first half, CCHS was flying high. After Helena scored the first points of the game on a two-yard connection between Lewellyn and Cave, CCHS quarterback Cannon Miller answered with a seven-yard strike to Jakeveon Bolding to put the Tigers ahead 7-6. Bolding caught seven passes for 163 yards and a touchdown. He added eight tackles on defense.

Demarcus Riddick had a 25-yard interception return for a touchdown, and Bolding recovered a fumble on defense to set up Rashard Childers for a six-yard touchdown run to make it 20-9.

Miller found Bolding on a slant pass and the senior took the ball inside the Huskies 40-yard line with under a minute to go in the first half. Miller completed a four-yard touchdown pass to Jakobe Worthy to put CCHS up 28-9 at the intermission. Miller went 11-for-20 for 201 yards, two touchdowns and one interception.

Demarrion Caffey led the Tigers defense with 15 tackles. Hunter Ousley had 12 tackles and two sacks, and Riddick had 11 tackles.

“There is no question that our guys are giving a 100% out there,” Morton said. “We showed heart, but it just did not fall in our favor this time.”

Chilton County (2-2) will hit the road on Sept. 16 for their next game against Calera High School. Kickoff is scheduled for 7 p.m. Helena (3-1) will host Pelham High School on the same day and time. Both games are Class 6A Region 3 clashes.