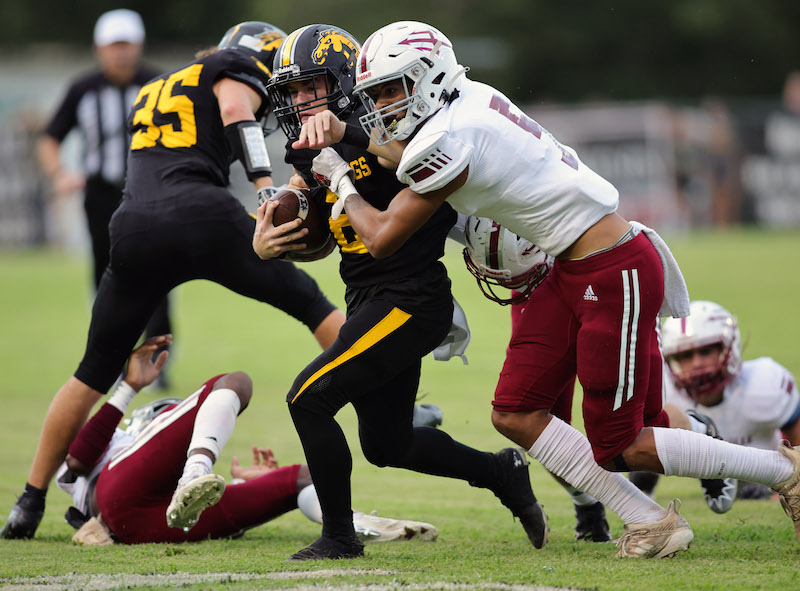 Maplesville High School used timely turnovers against Central High School-Hayneville to get their first win of the season 24-8 on Sept. 2 on the road.

The Red Devils only outgained Central by 14 yards, 212 to 198, but had three interceptions to aid their offense. Evan Harrison, Payton Cook and Jakavion Jackson all pulled down interceptions in the game. Maplesville was led by Jackson on offense with 129 yards rushing on 16 carries and one touchdown. The Red Devils had 181 rushing yards in the game overall.

Senior quarterback Troy McMillian completely three passes, and two were for touchdowns. He threw for 31 yards.

“We played a lot better as a team and as a unit,” Maplesville coach Brad Abbott said. “Coach Bailey made some changes and got our kids focused in on playing the type of defense we need to play this year, and the kids responded by going out there and executing the game plan.”

McMillian threw a three-yard touchdown pass to Johnathan Wilson just before the end of the first quarter. Jackson added a two-point conversion to make it 8-0. The Red Devils doubled their lead in the second with McMillian finding Cook for a 20-yard touchdown connection, and another Jackson two-point run.

Central cut the lead in half midway through the third quarter on a 70-yard touchdown pass and the score held steady at 16-8 until two minutes left in the game. Jackson put the game on ice with a six-yard touchdown run with a 1:50 left on the clock. A McMillian pass to Wilson for the two-point score pushed the final tally to 24-8.

Ensign Payne and Harrison led Maplesville on defense with five and a half tackles each. Wilson had five tackles.

Maplesville sits 1-2 on the season, but is 1-0 in AHSAA Class 1A Region 4 play and the Red Devils control their own destiny as far as postseason play is concerned.

“They did a good job realizing that there are two sets of records,” Abbott said. “They definitely did a good job focusing in, and going on the road in any region game is tough.”

Maplesville will play the last of its four-game road trip to start the season in its next game on Sept. 9 against Notasulga High School.