Billingsley gets first win of season over Calhoun 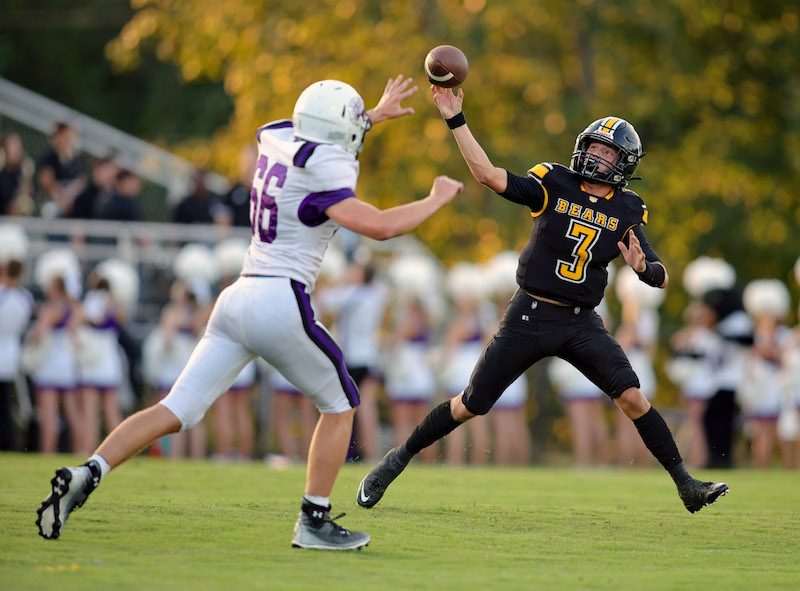 After an off week last week, Billingsley High School thumped Calhoun High School 42-6 on the road on Sept. 2 to get their AHSAA Class 1A Region 4 schedule off to a positive start.

The Bears were led by quarterback Landon Jones who went 18-for-23 for 304 yards and three touchdown tosses. He added 47 yards rushing on nine carries and a touchdown to his totals.

Calhoun was loading the box in the middle of the field and giving Billingsley the opportunity for one-on-one coverage for their wide receivers.

Landon Jones took full advantage of that and worked the run-pass-option offense to perfection with the help of Randriquis McCary. McCary ran for 105 yards on 12 carries and hauled in three catches for 83 yards and a touchdown.

“Our RPO game was big because we were able to move backers and get their safeties to come down field,” Billingsley coach Lanny Jones said. “Once we got in man and in motion, it through them off a bit with misalignment, so we were able to take advantage of that in the run game.”

Billingsley led 18-0 at halftime, but had three touchdowns called back in the opening half by penalties. The Bears had over 150 yards of penalties in the game.

“We have to clean that part up,” Lanny Jones said. “I still think we need to create a better mindset of taking over games.”

Landon Jones favorite target was Z’Londre Tyus with the senior catching six passes for 78 yards and a touchdown. Tyus had a 17-yard touchdown run the game as well.

Billingsley posted 511 yards of total offense against Calhoun with over half of those coming via the air by Landon Jones.

“It was good to know our blocking has gotten better to allow him to do it, and the receivers are getting better and were able to make plays,” Lanny Jones said.

Lejohn Laister and Kyle Boice led the Bears on defense with three tackles and an interception each. Calhoun managed just over 100 yards of total offense against a stout Billingsley defense.

“Our kids have all come together for that one common goal and that is to try to win each week,” Lanny Jones said. “Once we get a mindset that we can play with anybody, and we know we can, I think that will continue to happen.”