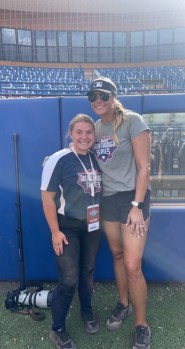 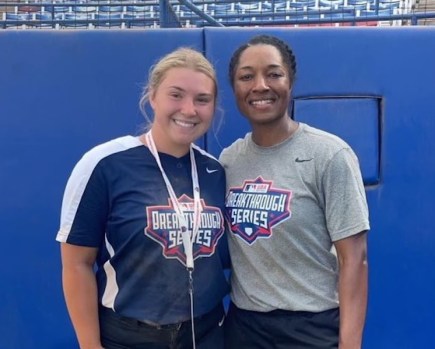 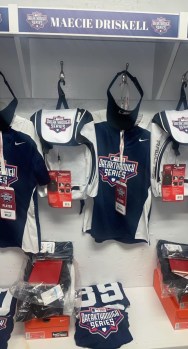 Maecie Driskell’s locker when she arrived for the series. (MAECIE DRISKELL | CONTRIBUTED) 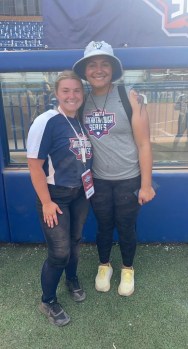 Every young player dreams of meeting professional players that have made an impact on them. For Chilton County High School senior softball player Maecie Driskell, that became a reality as she was selected to participate in the 2022 MLB Softball Breakthrough Series in Oklahoma City, Oklahoma.

Driskell was one of 60 players across the United States that were invited to participate in the series from Aug. 25-28 at the USA Softball Hall of Fame Stadium. The event is completely cost-free to the players with MLB covering everything. Driskell was the only player from Alabama selected.

“It was definitely an amazing experience. Once in a lifetime for sure,” Driskell said.

Driskell plays for the MLB RBI program in Montgomery and the program nominates 10 players each year. A video of each of the players was sent to the selection committee, and Driskell was the player selected.

The Montgomery RBI program has had a few other players selected to play in the Breakthrough Series in the past. Driskell’s ability in the circle and at the plate made her standout.

“She has a great bat, and when she pitches, she can spin the ball and locate her pitches,” Krystle Lawson, Driskell’s pitching coach, said. “That is what has taken her to that next level.”

Driskell flew by herself to Oklahoma City, and the first day she got her uniforms and met the coaches she would be working with. The second day the program began the skill work sessions and working on specific skills sets.

“I learned how to perfect my skills out there,” Driskell said.

Along with the practice on the field, Driskell was able to go to seminars with former USA softball players, go through combine-like evaluations and learn off-field tactics that can help her moving into her senior year. Her favorite part of the instructional part of the program was sitting in the room with all the coaches and asking them questions.

“Seeing who you are as a player and finding your personality, this really helped with that,” Driskell said. “Going out there and being the only player from Alabama, and I had no one else. It was definitely really nerve racking, but when I got there, everyone was welcoming and super nice.”

Driskell got to meet and get instruction from players like Natasha Watley and Jocelyn Alo. However, Driskell’s favorite part of the trip was getting to meet Olympic gold medalist Jennie Finch.

“Jennie Finch was my favorite to meet because when I was little that was all I watched was videos of her constantly,” Driskell said.

Driskell was able to learn valuable lessons from all-world softball players that only 60 girls in the country were able to get this summer. The next step for Driskell is getting ready for the high school season next spring. Her plan is to instill everything she learned into everyone else at CCHS, and use it to propel her towards the next level.

“Knowing that I have learned all these skills will help me in the game, and hopefully get some offers and further my softball career,” Driskell said. “I am ready to go into practice and teach the younger ones what I have learned this past weekend.”