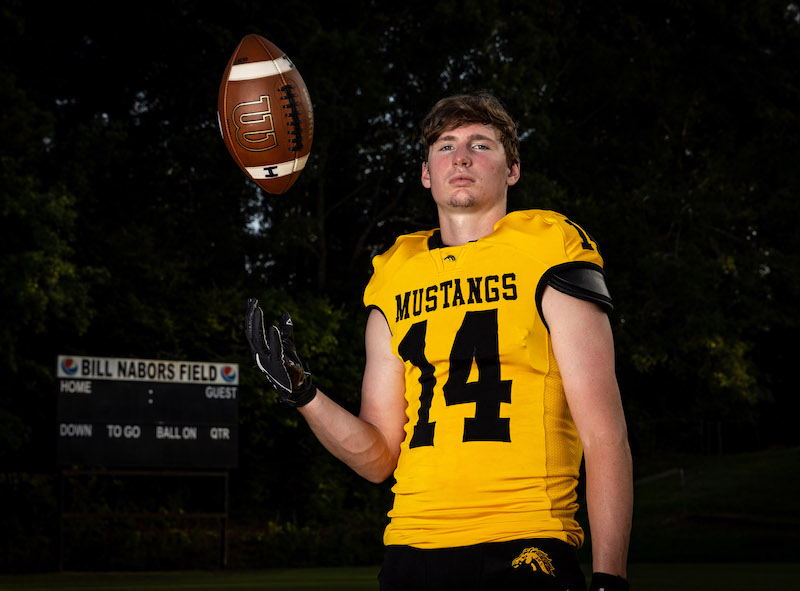 Editor’s note: This article originally published in the 2022 edition of Kickoff Magazine. Copies are available at The Clanton Advertiser office, 1109 Seventh Street N in Clanton.

Isabella High School’s football program has been one of the best in Chilton County in recent years, along with their next-door neighbors in Maplesville. Isabella’s Zac Chapman has been able to see that sustained success firsthand and has excelled in the program.

Over a 1,000-yard rusher last season, Chapman will have to establish the run game for the Mustangs in 2022 much like he did last season.

“He has been playing for us for a long time, and he is a game changer,” Isabella head coach Tate Leonard said. “He does a real good job wherever we put him on the field, especially at running back. He just brings a lot to our program.”

Chapman has been playing football his whole life, but switched to running back his sophomore year. Since then, Chapman has been able to post stellar seasons behind a stout offensive line in front of him.

“I have always loved the sport. It always teaches me things in life like not to give up,” Chapman said. “My offensive line, they help me out a lot. Without them, I cannot do much. Everyone on the team keeps me going.”

Last season, the Mustangs reached the second round of the AHSAA Class 2A state playoffs but fell to B.B. Comer High School 34-25. After region realignment, B.B. Comer is now in Region 4 with Isabella, and the two will face off on Sept. 30, a game Chapman says he has circled on his calendar. Regardless of the outcome, Chapman said the game will help the team going forward into the late season push to make the postseason.

“We had a battle last year in the second round, but we have to come back stronger this year when we play B.B. Comer again,” Chapman said. “We have them at their place in the middle of the season, so we need to be ready to play.”

Leonard and the Isabella program are no strangers to the state playoffs having made it in each of his first six years at the school. The Mustangs won a playoff game in five of the six years.

Getting kids to believe in themselves has been the biggest thing that has made Isabella as successful as it has been, according to Leonard.

Chapman said Leonard also teaches the team toughness and having a positive attitude. Chapman wants to be remembered as a leader at Isabella once his high school career is over, and someone who picks others up when they are down. With only four returning starters from last year on both offense and defense and a lot of young players, Chapman will need to be that leader to help guide the Isabella ship to a seventh-straight postseason.

“I just want to see everybody give their best and have a good attitude,” Chapman said. “Everybody on our team has a good attitude, so I cannot complain. Coach Leonard and all the coaches do a real good job and are the reason we have good attitudes and mental toughness. They push us every day, and it helps a lot.”

Leonard will try to get the ball into Chapman’s hands as much as possible this season both in the running game and through the air.

“We hope to have another big year of him rushing the ball,” Leonard said. “We are going to throw to him to move him around and give him a chance to do his thing.”