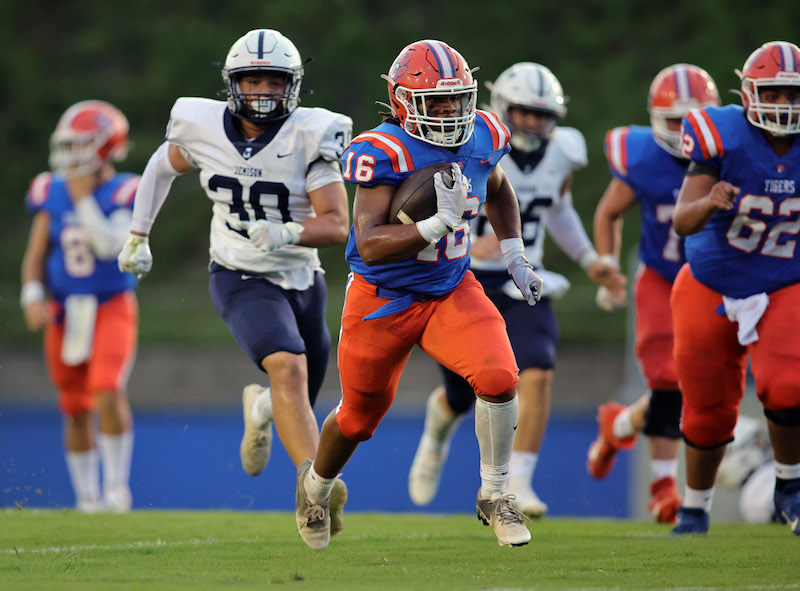 Chilton County High School’s Rashard Childers is this week’s athlete of the week after his notable performance on the ground against Jemison High School on Aug. 25.

Childers posted a game-high 149 yards rushing for the Tigers on 18 carries, an 8.3 yards per carry average. His longest run against Jemison went for 34 yards. Childers punched in five touchdowns against the Panthers, and three of those in the first half where the senior did most of his damage. One hundred sixteen of his 149 yards came in the first half as well.

Chilton County head coach Marvin Morton said after the game that he was impressed with Childers toughness running the ball during the game.

“The physicality, he brings that to the team. He is one of those guys who fights hard for that extra yard, and takes pride in himself being a power running back,” Morton said. “He has worked hard in the offseason to improve his strength and his ability to make the cuts he needs to do.”

Childers’s 241 yards this season through two games puts him 15th overall in the state of Alabama in rushing yards. He is one of only six running backs in the state with six or more rushing touchdowns on the season and is posting a 6.2 yards per carry average.

Looking into region play, Morton hopes to get Childers involved in the Tigers passing game more as well.

“I think Rashard is very versatile player,” Morton said. “We gave him a goal this season that he would get about 18-20 carries a game, and he has worked hard to have that durability to do so.”

Chilton County sits 2-0 after two games, with a big help from Childers. The Tigers begin AHSAA Class 6A Region 3 play on Sept. 2 against Briarwood Christian School in their toughest test to date. It is no secret Chilton County is one of the smallest Class 6A schools in the state by enrollment. However, Morton is using that as a motivation tactic for his team, and against the pundits that say CCHS cannot compete in the 6A class.

“That is something that is definitely in our guys heads, to prove the doubters wrong about us and 6A competition,” Morton said. “We have a chip on our shoulders going into Briarwood this Friday.”

The Tigers game against the Lions is on the road at Briarwood at 7 p.m.

A pair of Class 2A Region 4 standouts also had great performances on Aug. 25. Isabella quarterback Eli Kendrick led the Mustangs to 30-6 rivalry win over Maplesville High School, and the senior contributed both on the ground and through the air.

Kendrick rushed for 113 yards on 18 carries and had two touchdowns. He added a 7-for-11 night through the air with two touchdown passes. Kendrick had a hand in every Isabella score against Maplesville, including punching in a pair of two-point conversions for the Mustangs.

A senior, Kendrick brings experience to the Isabella offense, and adds to the leadership the Mustangs upperclassmen are known for.

Across the way, Thorsby’s Nate Thomas had a big night for the Rebels on the road at Prattville Christian. Thomas, normally a wide receiver, slid to the Rebels backfield to running back in the absence of starting quarterback Remington Taylor.

Thomas’s response to the change of position was 248 rushing yards on 15 carries and three touchdowns. He ripped off a 90-yard touchdown run for his longest rush in the game, and averaged 16.5 yards per carry. He grabbed four catches for 34 yards and a touchdown in the game, too. Thomas sits seventh in the state with 318 rushing yards through the first two games.

Thorsby coach Daryl Davis said that running the ball was the game plan coming into the game, and Thomas helped execute that plan to perfection.