Harrison protecting the brand at Maplesville 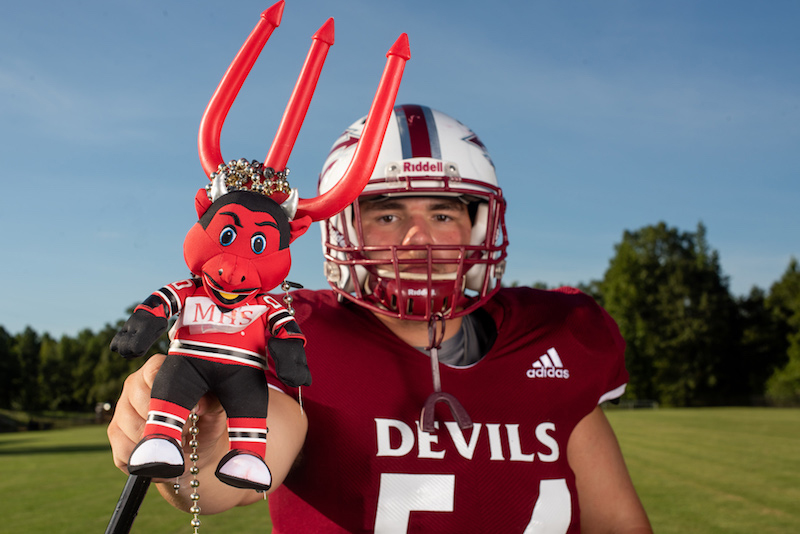 Editor’s Note: This article originally published in the 2022 edition of Kickoff Magazine. Copies are available at The Clanton Advertiser office.

There is a standard in Chilton County when it comes to high school football success, and that is Maplesville High School. Senior offensive lineman Jackson Harrison is trying to “protect the brand,” and keep the Red Devils as one of the most successful programs in Alabama.

“We had that three-peat, and all those championships and people look at that and they think Maplesville football must be good, so you have to live up to that,” Harrison said. “You just have to fill that role, and give it your all every play.”

Maplesville head coach Brad Abbott said Harrison always leads by his actions, is the first one there and last one to leave and puts the team before himself. Harrison said he wants to be remembered as someone who gave it their all and best to the Maplesville program.

Harrison will fill the role of center on the offensive line this season for Maplesville. The Red Devils lost four of their five starters on the line last season.

“I just feel like it is a real important position. Without the linemen, you cannot do much. I feel like it is really one of the more important spots on the field,” Harrison said. “I believe we are going to be pretty good. You just have to work hard, and have that heart to keep going. We are just excited to get out there and play some hard-nosed football.”

Harrison said the Red Devils are playing with a chip on their shoulder this year because they want to get back to a top program in the state again. Maplesville fell to the eventually AHSAA Class 1A state champions Sweet Water High School last season in the quarterfinals.

Since 1984, Maplesville has only missed the playoffs once in 2003 and been to six state finals in that span, winning four of them. The Red Devils are a staggering 32-5 in the first round and 27-5 in the second round of the AHSAA state playoffs in program history.

Abbott started in 2019 and has continued that tradition of winning at Maplesville “by teaching the players to work hard and to outwork the man beside you,” according to Harrison.

Nothing has changed at Maplesville by way of culture since the 1980s. The coaching staff is 80% former players, including Abbott. A family environment is preached to the players, and it is easy to buy in when they see the success of the program.

Abbott has been asking the team throughout the summer what motivates them, because all team and individual goals have been achieved. He wants that winning tradition to continue.

Harrison said he is interested in getting into the work force after high school and wants to work in the auto body industry.