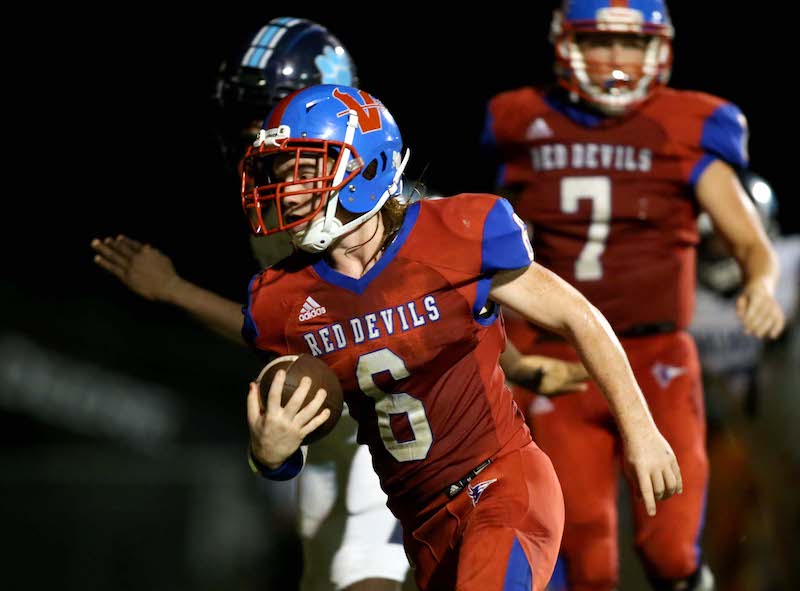 Verbena High School kept up its winning ways on Aug. 26 with a 50-18 win over Fayetteville High School at home.

Verbena was led by running back Jacob Morris who had 155 yards on the ground and a touchdown on seven carries. D.J. Jackson added 128 yards rushing and two touchdowns on six carries.

Jared Quinn and Lance Edwards got in on the action on the ground for the Red Devils posting 26 yards and 18 yards rushing, respectively.

“We go into every game telling our guys up front that the game is on them,” Verbena assistant coach Gehrig Douglass said. “Every yard gained is on them … (The offensive line) does not ask for anything in return, and they are a selfless group, and they love to have fun out there.”

However, Fayetteville held an 18-16 lead at halftime over Verbena, but it was all Red Devils in the second half.

Verbena kept up their ground and pound mantra, and Quinn got into the end zone on a four-yard touchdown run. Marino added a two-point conversion run to give Verbena the 24-18 lead.

Marino added a 27-yard touchdown run in the third quarter, and Quinn punched in the two-point conversion to stretch the Verbena lead to 32-18 after three quarters.

Marino was 4-for-5 passing in the game and added 51 yards rushing on eight carries to his totals.

The Verbena defense was stifling in the second half led by Nate Morris. Nate Morris had five tackles and two fumble recoveries for the Red Devils, one of which was a scoop and score from 59 yards out.

“We made our adjustments at halftime, and Jacob Morris lead the charge for us tonight,” Douglass said. “Nate Morris, too. His senior year and having a great year. I could not be prouder of them.”

Jacob Morris had six tackles and blocked an extra point attempt. Ethan Dopson and Chris Guzman each had an interception for Verbena.

Holding a 32-18 lead heading into the fourth quarter, Verbena added to their lead with Jackson ripping off a 79-yard touchdown. Jacob Morris had a 27-yard touchdown run to put the final touches on the win for Verbena.