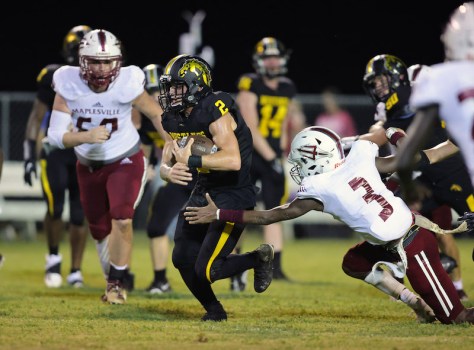 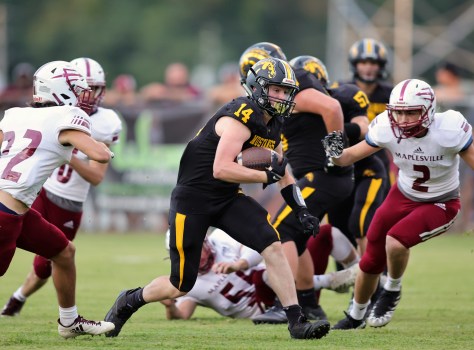 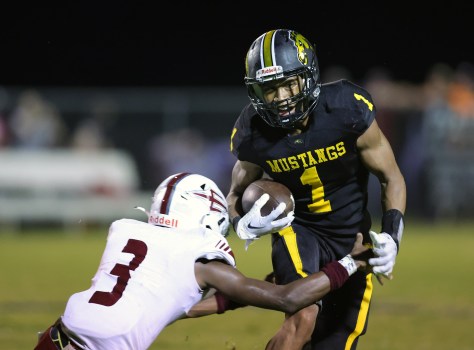 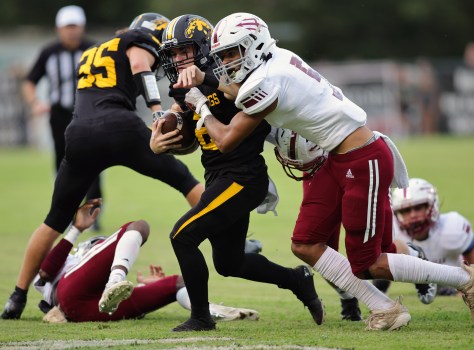 Isabella High School used a potent rushing attack and controlled the line of scrimmage to defeat Maplesville High School 30-6 at home on Aug. 26.

Maplesville got on the board first with Jakavion Jackson taking a run 49 yards to the end zone midway through the opening quarter. The two-point conversion attempt was no good, and the Red Devils held a 6-0 lead. From there, it was all Mustangs as they scored 30 unanswered points.

Isabella piled up 308 yards of offense in the game, 231 of those on the ground. Mustang quarterback Eli Kendrick ran for a game-high 113 yards and two touchdowns. Jadaiah Works added 62 yards, and Zac Chapman rushed for 45 yards.

“That is a good football team, and they have a very hard offense to stop, and it takes a lot of discipline and our guys were spot on,” Isabella coach Tate Leonard said. “We did what we had to do in all three phases of the game.”

Isabella held a 16-6 lead at halftime with Maplesville receiving the second half kickoff. The Red Devils fumbled the return, and Chapman recovered it for the Mustangs. That setup a 12-yard touchdown run by Kendrick and a two-point conversion to stretch the Isabella lead to 24-6.

The next kickoff the Mustangs recovered another Maplesville fumble, this time with Works scooping the ball up.

The Mustangs defense was stellar throughout the night holding Maplesville to 229 yards of offense and earning three turnovers in the game. Garrett Price led Isabella with six tackles followed by Dawson Edwards with three and a half. Tyler Mims added three tackles and an interception.

On the first play of the fourth quarter, Kendrick put the final blow to the Red Devils finding Chapman on a nine-yard touchdown connection, their second of the game to make it 30-6 Isabella.

Jackson ran for 73 yards and a score for Maplesville, and quarterback Troy McMillian went 10-for-16 for 86 yards. Johnathan Wilson was the leading receiver for the Red Devils hauling in three catches for 47 yards. Evan Harrison had three catches for 26 yards.

“There was not a big enough improvement from last week to this week, even though we saw some improvements,” Maplesville coach Brad Abbott said. “We start regional play next week, so the kids need to come in Monday with the mindset that the season starts next week as far as vying for playoffs. We need to put this loss behind us and learn from our mistakes and grow from them.”

The first half was a battle in the trenches with both teams looking to establish their running game early.

Isabella responded to the opening score from Maplesville on their next drive capped by a 22-yard touchdown run by Kendrick. Kendrick punched in the two-point conversion to give the Mustangs the 8-6 lead after the first quarter. Kendrick went 7-for-11 in the game with 77 yards and two touchdowns.

“We don’t have to just run the ball, and we take what the defense is giving us,” Leonard said. “I am really proud of our kids tonight, that is a big win for our program.”

Isabella mixed up the play calling well in the first half keeping the Red Devils defense on guard for the pass and run games. Isabella called 24 rushing plays and nine passing plays in the half that were sprinkled in at the right time.

The best time in the first half for the Mustangs to dial up a pass was in the last two minutes of the first half. Kendrick found Chapman out of the backfield for a screen pass and the senior took it 34 yards to the end zone. Chapman added a two-point conversion run to stretch the Isabella lead to 16-6 at halftime. Chapman caught three passes for 49 yards and two scores in the game.

“We can have and celebrate, but we have to go back to work Sunday,” Leonard said. “Another big week and another big rival at home so we cannot dwell on it. We have to move on and get better.”

Isabella (1-0) will host Thorsby High School on Sept. 2 to open AHSAA Class 2A Region 4 play. Maplesville (0-2) will begin region as well on the same day traveling to Central High School, Hanyeville for a Class 1A Region 4 matchup.