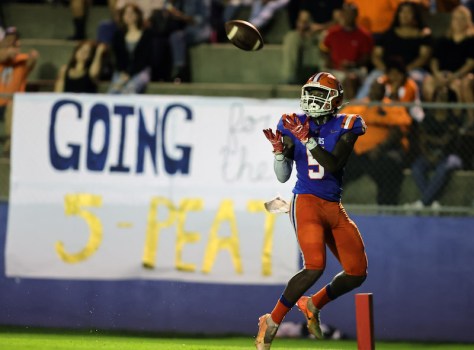 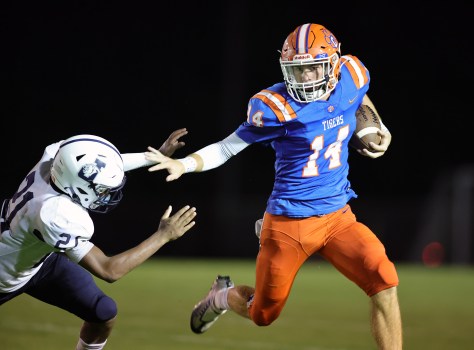 Dreshaun Binion makes a cut through the Jemison defense for the Tigers. (BRANDON SUMRALL | SPECIAL)

Childers amassed 116 yards in the first 24 minutes on 11 touches and punched in three Tiger scores.

“Rashard is a tough kid, and I was proud of him tonight for the way he ran the ball,” CCHS coach Marvin Morton said.

Childers scored on a nine-yard and one-yard run in the second half to give him five scores on the night. He finished the game with 149 yards rushing on 18 attempts.

While the Tigers offense was firing on all cylinders, their defense was equally impressive against the Panthers allowing less than 30 yards passing and not much room for the running game.

“The defense right now is creating opportunities through turnovers, and the guys are really putting a lot of focus on the football,” Morton said. “Whatever way we can get it, by pursuit or taking the ball away, has helped us these first two games.”

Jakobe Worthy and Jamon Dejarnett grabbed interceptions in the game for the Tigers defense.

Jemison’s Efrain Villeda was the leading rusher for the Panthers posting 70 yards on 12 carries.

Chilton County quarterback Cannon Miller went 17-for-26 in the game for 191 yards and two touchdowns. Miller found Jakeveon Bolding for a 15-yard touchdown connection in the second quarter and Dreshaun Binion for a nine-yard score in the third quarter.

Parker Willis, Demarcus Riddick and Worthy each caught at least two passes in the game from Miller. Miller added 49 yards on four carries to his totals.

“We had a lot of penalties on our end, so that is something we will need to clean up going into next week,” Morton said. “Make sure we take care of those mistakes we had early on in the game, but I was happy with how they responded in the second half.”

Jorge Castillo added a 20-yard field goal late in the fourth quarter to push the final tally to 50-0.

“I feel good going (into region play) … We have a tough Briarwood team next week,” Morton said. “We are going to focus and prepare for them next week, but I was pleased with our guys today with the way they played and stayed after it.”