Taylor shines at quarterback for Rebels in week one 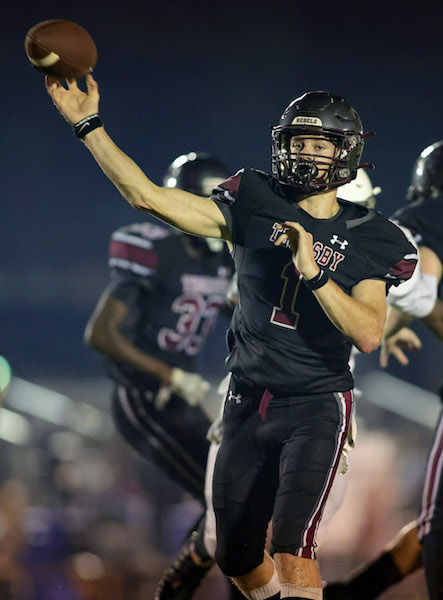 Thorsby High School’s Remington Taylor accounted for 348 yards for the Rebels in their win over Jemison High School 44-33 on Aug. 18. (BRANDON SUMRALL | SPECIAL)

Thorsby High School’s Remington Taylor is this week’s athlete of the week after his performance against Jemison High School in the Rebels 44-33 win.

Taylor made his presence known both through the air and with his legs on Aug. 18. The senior posted 180 yards passing while going 11-for-18 and one touchdown pass. He added 168 yards on 15 carries on the ground and two touchdown runs.

While the numbers were impressive for Taylor accounting for almost 350 yards of offense for the Rebels, it was the timing of his big plays that helped sway the outcome of the Highway 31 rivalry.

Jemison jumped out to an early 12-0 lead after two quick touchdowns in the first quarter. Taylor cut the lead down to 12-8 just after the start of the second quarter with a 12-yard touchdown connection to Nate Thomas. On the next Thorsby drive, Taylor found Braxton Price for a 43-yard connection to setup the Rebels inside the Jemison five-yard line.

Thomas gave Thorsby the 14-12 lead on the next play.

“I guess we got a big head out there and let them come out and get on top early,” Taylor said after the game on Aug. 18. “I am glad the team showed their pride and came back and fought hard and got us the win.”

Taylor continued his timely plays in the second quarter capping an 88-yard drive by the Thorsby offense with a 10-yard touchdown run to stretch the Rebels lead to 22-12.

Thorsby coach Daryl Davis, who is known to be an aggressive play caller, dialed up an onside kick on the ensuing kickoff, which the Rebels recovered to give Taylor and the offense the ball back.

With the ball at midfield and under a minute remaining in the half, Taylor threw two incomplete passes to put Thorsby into third and 10 from the 50-yard line. From there, Taylor ripped off a 26-yard run, threw a seven-yard pass to Caron Church and then a 22-yard touchdown pass to Grayson McManus on three consecutive plays to end the half in the end zone. Thorsby ended the first half scoring 28 unanswered points.

“A win like this puts some good thoughts in our heads and makes us believe we can have a good season,” Taylor said after the game.

Taylor’s composure was impressive against Jemison as well. He threw an interception on Thorsby’s first drive of the second half that led to Jemison scoring to make it 28-26. When the Rebels got the ball back and the first play of the drive, Taylor scampered for a 63-yard touchdown run that put all the momentum back on Thorsby’s side.

Davis said, after the game, he was impressed with the seniors play and composure throughout the ups and downs of the contest.

Verbena High School head coach Allen Brothers said preseason that there is no pressure to win at Verbena. Well, after their first game, the Red Devils find themselves already in the win column with some big help from their running back committee.

Six different running backs got in on the action for Verbena in their 36-8 road win over Central of Coosa County High School on Aug. 19. Johnathan Marino scored the first rushing touchdown for Verbena in the game, a three-yard score in the first quarter. Lance Edwards added a touchdown run in the first half. The best back for the Red Devils was arguably D.J. Jackson, who scored on a 34-yard touchdown run and added a 79-yard kickoff return touchdown, both in the second quarter. Jackson rushed for 118 yards total in the game.

All six running backs for the Red Devils combined for around 410 yards rushing against Central of Coosa County. If Verbena can continue its ground and pound success, that winning pressure could be turning up a bit for the Red Devils.