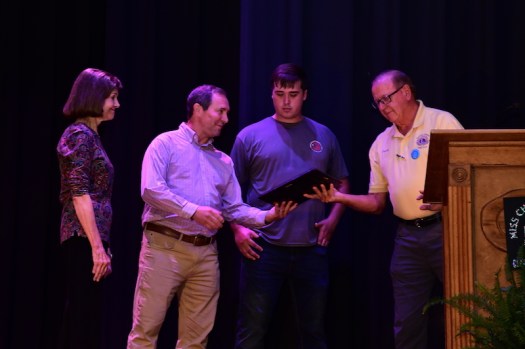 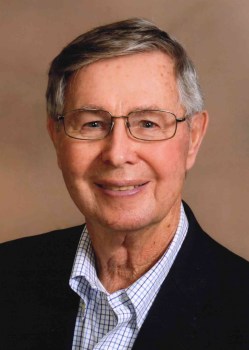 The Clanton Evening Lions Club presented its Pillar of the Community Award to the McKinnon family on Aug. 20 in memory of Wayne McKinnon.

The award was presented to his wife Lynn, son Mark and grandson Evan.

Club member Frank Daniel said the award is given to “an outstanding civic leader” each year.

“He is probably best known for his friendliness, his outstanding personality and his great sense of humor,” Daniel said. “… I could go on all afternoon about all of the accomplishments that Wayne McKinnon did that nobody ever knew about. He was committed to so many causes that you just wouldn’t believe.”

Daniel said he could personally attest to how Wayne McKinnon helped people whenever he could.

“Dad did mean a lot to the community, but to me he was just dad, so I wanted you all to know that he was a loving father,” Mark McKinnon said. “In this day and age, love really is time.”

He recounted how his father had made a point to spend time with his family.

He said there were things his father gave to that he had never known.

“In the weeks following his death, I had so many people come to me with stories,” Mark McKinnon said. “… He did a lot of generous things without any fanfare. For that, I admire him. God blessed dad with a lot of talents, blessed him financially, so all the glory goes to God.”

Wayne McKinnon was a successful businessman “and a lifelong Clanton and Chilton County supporter,” Daniel said.

He started in the car dealership industry at a young age.

“He was the youngest Chrysler dealer in the United States at the age of 23,” Daniel said.

Later, Wayne McKinnon grew McKinnon Motors into what it is today.

He was a part of bringing both Jefferson State Community College and St. Vincent’s to the county.