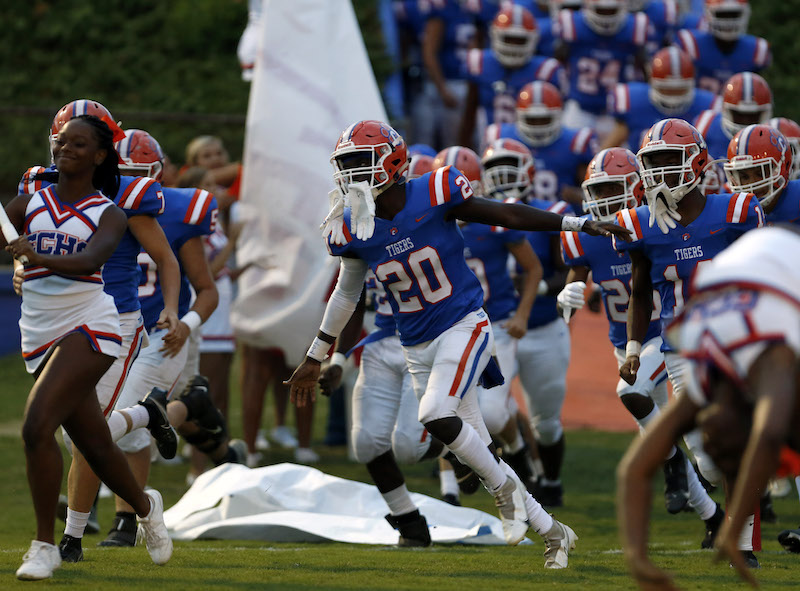 Leading 23-8 at halftime, Chilton County commanded much of the first half. However, Bibb County came out firing on all cylinders in the second half. Quarterback John Downs found Colby Collums for a 55-yard touchdown connection to make it 23-16 after the successful two-point conversion.

Downs connected on another touchdown pass in the fourth quarter, this one from 17 yards out, to give Bibb County the lead 24-23 after another successful two-point conversion.

“One of the problems we had last year was finishing ballgames, when the momentum would shift we would fold,” CCHS head coach Marvin Morton said. “Ever since this summer till now, finishing has been a keyword for us, and I was very proud of the way they persevered through that.”

The Tigers offense got the ball with just under seven minutes left in the game, and marched down the field to the end zone capped by a one-yard touchdown run by Rashard Childers. Childers rushed for 90 yards on 21 carries and one score and added a sack on defense to his totals.

The Tigers defense forced and recovered its second fumble the next Bibb County drive to end the game.

“I was very impressed with the defense,” Morton said. “For us to fly to the football, be relentless and create opportunities for the offense through turnovers, I was very happy with the effort they showed on the defensive side of the ball.”

Jakobe Worthy got the CCHS defense started early as he picked off a speed option pitch and took it for a touchdown in the first quarter. A bad snap on a punt for Bibb County gave CCHS a safety and a 9-0 lead after the opening quarter. The Tigers defense forced five turnovers from Bibb County in the game.

Worthy was everywhere in the game for the Tigers hauling in three catches for 45 yards and had five tackles and two interceptions on defense.

Jakeveon Bolding contributed on both sides of the ball for the Tigers as well. The senior caught three passes for 47 yards and a 28-yard touchdown in the second quarter from quarterback Cannon Miller. Bolding made six tackles and had an interception on defense.

The Tigers special teams blocked a punt and scooped it up for a touchdown return in the second quarter to make it 23-8 at halftime with Chilton County on top.

“We are a tight bunch, and you need to rely on each other to win tight games,” Morton said. “Those guys banded together and pulled it off in the end.”