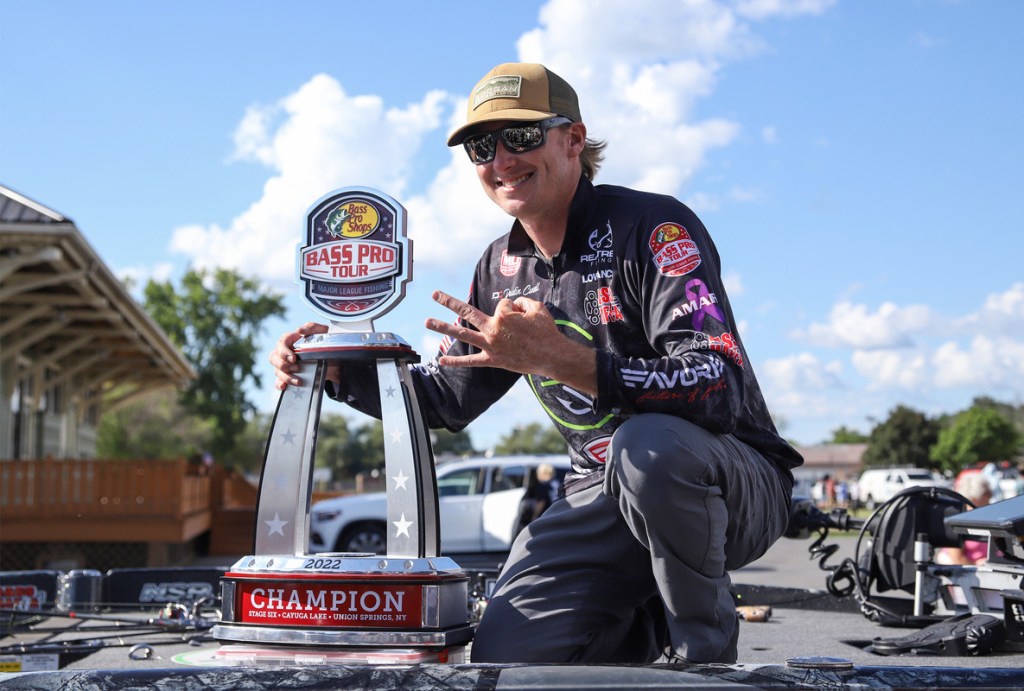 UNION SPRINGS, N.Y. — In a week where largemouth bass made up more than 80-percent of all of the fish caught on and weighed by the 80 anglers that competed in the Major League Fishing (MLF) Bass Pro Tour on Cayuga Lake, Googan Baits pro Dustin Connell, stuck with smallmouth and bested them all. The Clanton, Alabama pro caught 25 scorable smallmouth bass weighing 96 pounds, 12 ounces, to win the Bass Pro Tour Fox Rent A Car Stage Six on Cayuga Lake Presented by Googan Baits in Union Springs, New York on Thursday. The victory was the third Bass Pro Tour win of Connell’s career – second of the season – and earned him the top payout of $100,000.

“I am shook up. This is unbelievable,” an emotional Connell said in his post-game interview. “I worked so hard for this tournament man. I sat out here and battled these waves, every day, and I practiced so hard, from daylight to dark. It’s so special to win two in one year. This is just nuts.
“I’d only been here once before – I came here a couple of years ago for an MLF Cup event on Cayuga,” Connell continued. “I only caught two bass, all day long. And now we’re holding the trophy up. And to win it with smallmouth – this is unreal.”
Connell spent the tournament drop-shotting a variety of baits, using his Lowrance ActiveTarget forward-facing sonar to follow the roaming schools of smallmouth.
“I caught all of my fish this week on a spinning rod. I had seven or eight of them tied up every day,” Connell said. “I was using 12-pound Gold Label Seaguar (fluorocarbon), and a variety of different baits. I was using a (Googan) Drag N Drop in green-pumpkin. I caught a bunch of key fish on it around all of the structure. For the suspended fish, I caught them on a shad bait. Just following them around. They love to roam during the summer and that’s the best way to catch them.”
The victory tied Connell with Tennessee pro Ott DeFoe for second-most career wins on the Bass Pro Tour all-time list with three. Academy Sports + Outdoors pro Jacob Wheeler, who finished runner-up to Connell this week, has the most Bass Pro Tour wins with five.
“I look at guys like Jacob and Ott, and to even be mentioned in the same conversation with them, as that type of fisherman… my gosh,” Connell said. “I’m just a kid out here, living his dream. I am so blessed to get this win.”
The top 10 pros from the Fox Rent A Car Stage Six on Cayuga Lake Presented by Googan Baits are:

Full results for the entire field can be found at MajorLeagueFishing.com.
Overall, there were 158 scorable bass weighing 519 pounds, 13 ounces caught by the final 10 pros on Thursday.
Brookeland, Texas pro Dakota Ebare earned Thursday’s Championship Round $1,000 Berkley Big Bass award, and the $3,000 Berkley Big Bass award for the overall largest bass of the event, with a massive 7-pound, 10-ounce smallmouth that bit a Strike King Baby Z-Too during Period 1. Ebare’s giant smallmouth was just 10 ounces shy of the New York state record that was set on Cayuga Lake in late June.
After six regular-season events in the 2022 Bass Pro Tour season, reigning Bally Bet Angler of the Year (AOY) Jacob Wheeler leads with 459 points with just one event left in the regular season, while Jordan Lee is in second place with 394 points. Dayton, Tennessee’s Andy Morgan sits in third with 373 points. Texas pro Alton Jones currently sits in fourth place with 356.5 points, while Randall Tharp rounds out the top five with 352 points.
The Fox Rent A Car Stage Six on Cayuga Lake Presented by Googan Baits featured anglers competing with a 2-pound minimum weight requirement for a bass to be deemed scorable. Minimum weights are determined individually for each competition waters that the Bass Pro Tour visits, based on the productivity, bass population and anticipated average size of fish in each fishery.
This six-day event was hosted by the Village of Union Springs and showcased 80 of the best professional anglers in the world competing for a purse of more than $805,000, with a top payout of $100,000. The tournament was livestreamed each day at MajorLeagueFishing.com and the MOTV app, and also filmed for television broadcast later this fall on the Discovery Channel.
Television coverage of the Fox Rent A Car Stage Six on Cayuga Lake Presented by Googan Baits will premiere as a two-hour episode at 7 a.m. ET, on Saturday, Nov. 12 on the Discovery Channel. New MLF episodes premiere each Saturday morning on the Discovery Channel, with additional re-airings on the Outdoor Channel. Each two-hour long reality-based episode goes in-depth to break down each day of tournament competition.
The Bass Pro Tour features a field of 80 of the top professional anglers in the world competing across seven regular-season tournaments around the country, competing for millions of dollars and valuable points to qualify for the annual General Tire Heavy Hitters all-star event and REDCREST IV, the Bass Pro Tour championship, which will be held next March on Lake Norman in Charlotte, North Carolina.
Proud sponsors of the 2022 MLF Bass Pro Tour include: 13 Fishing, Abu Garcia, A.R.E. Truck Caps, B&W Trailer Hitches, Bally Bet, Bass Cat, Bass Pro Shops, Berkley, Covercraft, Favorite Fishing, Garmin, General Tire, Googan Baits, Grundéns, Guaranteed Rate, Humminbird, Lowrance, Luminox, Mercury, Minn Kota, Mossy Oak, Nitro Performance Boats, Onyx, Plano, Power-Pole, Power Stop, Rapala, Starbrite, Toro, Toyota, Wrangler, Yellowstone Bourbon and Zoom.

About Major League Fishing
Major League Fishing (MLF) is the world’s largest tournament-fishing organization, producing more than 250 events annually at some of the most prestigious fisheries in the world, while broadcasting to America’s living rooms on CBS, the Discovery Channel, the Outdoor Channel, CBS Sports Network, the World Fishing Network, and on-demand on MyOutdoorTV (MOTV). Headquartered in Tulsa, Oklahoma, with offices in Benton, Kentucky, the MLF roster of bass anglers includes the world’s top pros and more than 30,000 competitors in all 50 states and 13 countries. In 2019, MLF expanded its portfolio of catch, weigh, and immediately release events to include the sport’s strongest five-biggest-fish format tournament circuits. Since its founding in 2011, MLF has advanced the sport of competitive fishing through its premier television broadcasts and livestreams and is dedicated to improving the quality of life for bass through research, education, fisheries enhancement, and fish care.