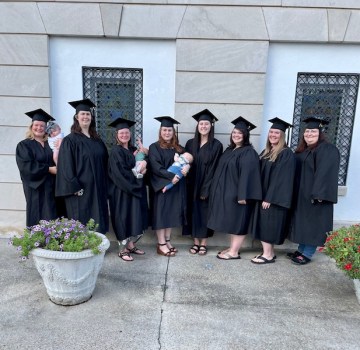 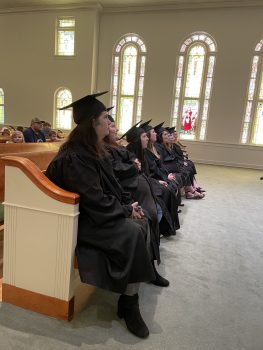 The graduating mothers were honored with a ceremony at Clanton First Baptist Church. (CARE NET | CONTRIBUTED) 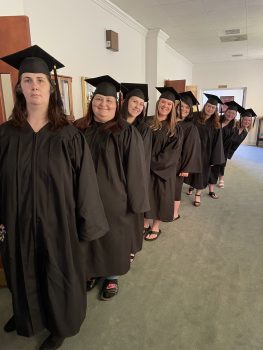 The graduates after the ceremony. (CARE NET | CONTRIBUTED)

Care Net of Chilton County held a graduation ceremony for its first eight graduates of their Parent University program on Aug. 12 at Clanton First Baptist Church.

The eight graduates, Lantha Anderson, Rebecca Bellefleur, Samantha Chain, Jessica Duncan, Kristen Endress, Debbie Hardcastle, Cheyane Martin and Chasity Porter, were the first graduating class from the program. The mothers participated in the 12-week program that taught them the 40 assets every child needs to become a successful adult.

“I was so proud of the mommas, they showed so much commitment,” Kaitlyn Burnett, teacher of Parent University, said. “As a parent, sometimes you feel alone and think no one is going through what you are going through. For them to see there are other people with the same thing going on as them, and seeing that community form was the most rewarding thing for me.”

The class was once a week on Wednesdays and was between one to two hours long. The mothers were not allowed to miss more than two weeks of classes in order to graduate. Two mothers went into labor while enrolled in the class, and both were at the next class with their newborns.

The eight mothers learned about five to six of the 40 assets each class. The assets included external assets such as support and empowerment and internal assets like positive values and social competencies.

“They focused on how they can implement them and make it practical and real,” Burnett said. “It is easy to see it on paper, but making it every day is what we were focused on each week.”

Mothers had homework throughout the program, and they would go and implement one of the assets they learned that week. The next class the mothers discussed how it worked or what they could do differently.

One of the graduates, Cheyane Martin, has been involved with Care Net since the day she found out she was going to be a mother. Martin found out she was pregnant at Care Net, and she said the organization has helped her immensely since then, including the Parent University program.

“Me and my daughter would not be where we are today without Care Net,” Martin said. “I wanted to make sure I did everything to the best of my abilities, and I cannot be thankful enough for the things they have done for us.”

Burnett said the mothers ended the class with a road map to help them implement the 40 assets of the course for their child growing up. Not every asset can be used at one time, and the mothers learned when the best time is for their children to learn them.

The class formed a community between the mothers, and they each have each other’s support now going forward, according the Burnett.

“They created so much community and accountability between each other,” Burnett said. “It was really neat to see them bond and come together … to become friends.”

The next Parent University program will be held at Thorsby High School starting on Sept. 19. Those interested can sign up by calling Care Net of Chilton County at 205-755-6767.