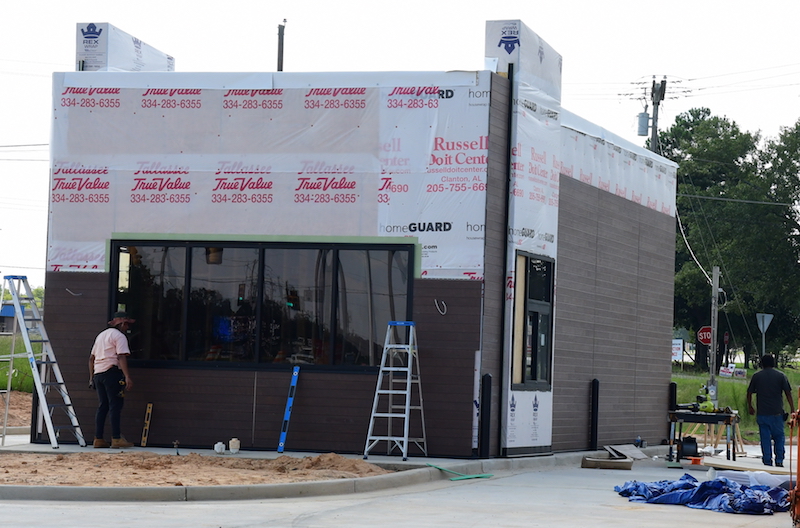 Construction on the Ellianos Coffee Clanton location is nearing completion.

With supply, crew and utility delays, Steve Walter said the project is about six months behind the initial schedule.

The couple became interested in opening a franchise after stopping at Ellianos Coffee during a trip to Florida.

While on the corporate website looking for other locations, she saw that franchise opportunities were available and mentioned that she “wished someone would open one in Prattville just because I enjoyed it.”

That initial conversation grew into researching what it would take to own a franchise. After visiting other stores and more consideration, they opened the first Ellianos Coffee franchise in Alabama in Prattville.

The Walter couple are still the only Ellianos franchisee in Alabama with locations in Prattville, Millbrook and Pine Level.

Steve Walter said the Clanton location will look identical to the location in Pine Level, which opened in April.

“The city has been great to work with, absolutely great.” Steve Walter said “Jeff (Mims, mayor of Clanton) has been absolutely helpful.”

Electrical and plumbing for the building is finishing up this week.

The Clanton Ellianos building will have a drive-thru window on both sides of the building, allowing for two lines for customers to be served. Lori Walter explained that the entire transaction will be done at the same window.

A mixture of part-time and full-time employees will be hired closer to the open date. There will be 15-20 employees.

The owners have already begun the search for a manager. Those interested in applying can send their resume to ellianos.al@gmail.com.

Around late-September applications for baristas will be accepted at ellianos.com by selecting the Clanton location.

In November 2021, the Clanton City Council approved a tax incentive agreement with a SLW LLC agreement would give the developer half of the revenue Ellianos brings in up to $45,000 or for six years, whichever cap is reached first.