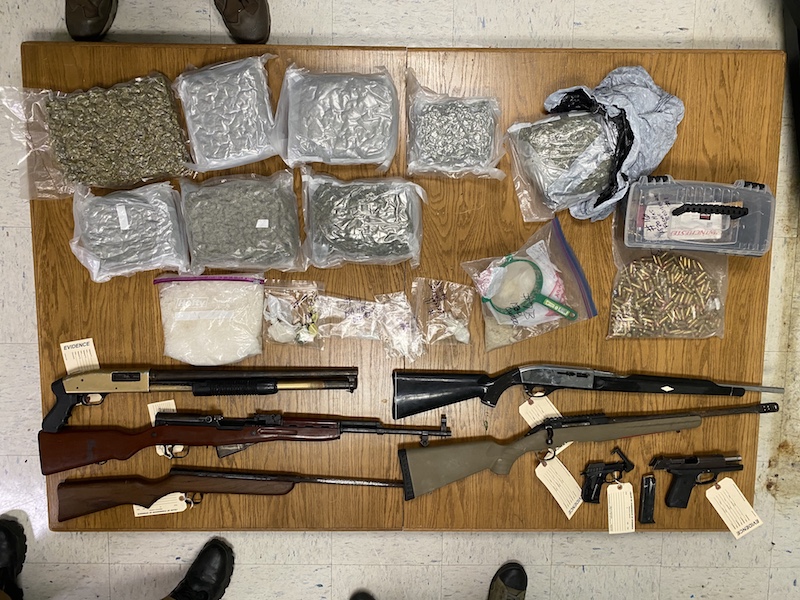 Narcotics investigators found and seized nine pounds of marijuana, 2.3 pounds of methamphetamine, drug paraphernalia, firearms and around $1,500 in cash on Aug. 1. (CCSO | CONTRIBUTED)

The Chilton County Sheriff’s Office has arrested three individuals on drug charges after a 911 call about a kidnapping led to a search.

Jose Juan Medellin Hernandez, Antonio Jimenez Sanchez and Ofelia Sala Sanchez have each been charged with trafficking methamphetamine and marijuana as well as unlawful possession of drug paraphernalia stemming from an Aug. 1 incident.

Medellin Hernandez called 911 on Aug. 1 stating his wife “had been abducted and possibly murdered,” according to a CSSO press release.

“A language barrier prevented a complete understanding of what the caller was reporting, however, a Spanish speaking Deputy Sheriff was on duty and responded to the caller’s location on County Road 54 south of Montevallo,” Sheriff John Shearon said. “Once on scene, … Medellin Hernandez advised the Deputy that his wife had been abducted and possibly killed by individuals living on County Road 1013 a short distance away. Medellin Hernandez further stated that he had been assaulted at the residence on County Road 1013, held against his will, and had just escaped.”

Deputies responded to 128 County Road 1013, where they spoke to Salas Sanchez. She said Medellin Hernandez had been talking with her husband Jimenez Sanchez, “but that she could no longer find her husband,” according to a press release.

“Not knowing the welfare of Medellin Hernandez’s wife or Salas Sanchez’s husband, Deputies asked for permission to search the residence for anyone injured or in distress,” Shearon said. “Salas Sanchez gave permission for Deputies to do so.”

Jimenez Sanchez was found “hiding in a bedroom closet,” the release stated.

While searching the residence for the missing people, deputies saw “marijuana, methamphetamine, drug paraphernalia, and firearms in plain view.”

A search warrant was secured, and narcotics investigators found and seized nine pounds of marijuana, 2.3 pounds of methamphetamine, drug paraphernalia, firearms and around $1,500 in cash.

“Subsequent investigation determined that Jose Juan Medellin Hernandez’s wife was safe at home and had not been kidnapped or injured,” Shearon said. “Investigators believe that Medellin Hernandez made the false report as a result of being under the influence of narcotics.”

Medellin Hernandez has also been charged with rendering a false alarm and misuse of 911.

U.S. Immigration and Customs Enforcement also has detainers on each of the suspects, according to CCSO.

The Jemison, Thorsby, and Calera police departments assisted with the investigation.