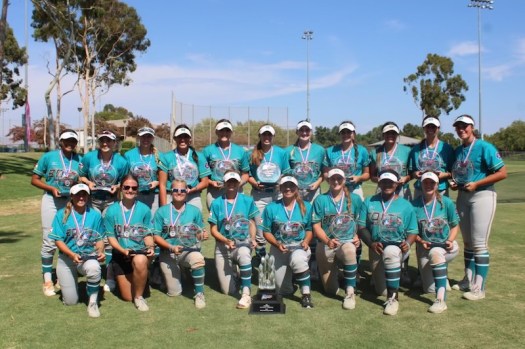 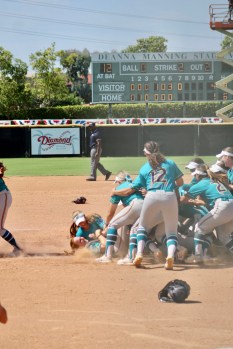 Giles gets piled on by her teammates after the final out. (MARLIE GILES | CONTRIBUTED)

The Birmingham Thunderbolts and recent Chilton County High School graduate Marlie Giles took home the 2022 Premier Girls Fastpitch National Championship on July 29 defeating a team from Oregon 4-1 in the finals. The Thunderbolts went a perfect 6-0 during the tournament to win the 18U Premier Bracket A.

Giles, a University of Alabama signee, blasted a solo home run in the final and took care of catching duties behind the plate to help boost the Thunderbolts to the win.

“We went out there with an expectation, and that was to bring back the championship,” Giles said. “We knew we were capable of it, we just had to come together as a team and make it happen, and we did.”

Giles and the Thunderbolts traveled to Southern California two days before their first matchup in the tournament on July 25 to practice. 2022 was Giles’s second trip the national tournament with the club.

The Thunderbolts took down their first two games with a combined score of 13-3 over teams from California and North Carolina. They followed that up with two more wins on July 28, a 6-1 win over a team from Illinois and 3-0 over another team from California.

A 2-0 win over a Nebraska team pushed Birmingham into the finals against the NW Bullets from Oregon.

The game was tied at one run apiece until the top of the sixth inning when the Thunderbolts scored a run on a wild pitch. Then, Giles stepped to the plate.

The game was broadcasted on ESPN, and Giles said many people in the community have come up to her and said they saw her playing and her the home run.

Giles said it never occurred to her that she was on national television during her moment running around the bases.

“I was just really locked in, and we were just worried about the game,” Giles said.

After crossing home plate, Giles celebrated with her teammates, and the camera showed her on the bench in the dugout in almost a trance. She said that was her moment to take in everything that had just happen.

“It was kind of like a reminiscing of everything that just happened within the last minute,” Giles said. “I was just so grateful … Going into the tournament God had really been with me, and I had really been relying on him to trust him through the process, and whatever happened, happened for a reason. No matter the outcome he was on my side.”

Giles ended her travel softball career in the best way possible, a winner. The Thunderbolts were crowned national champions in many of the players’ last softball experiences before playing for the college programs they have signed with.

“Being able to end it the way we did in that game was special,” Giles said.

Now, Giles will transition to the college ranks in Tuscaloosa where she said she is excited to compete as well as taking in the whole experience.

The CCHS graduate said she is looking forward to learning from 2022 All-SEC catcher Ally Shipman at Alabama.