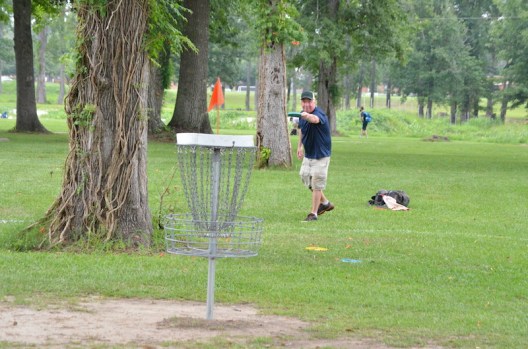 A player lines up a putt. (CAREY REEDER | ADVERTISER) 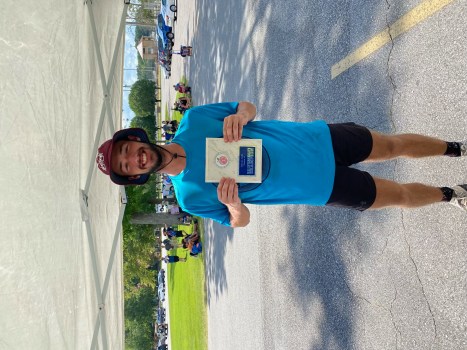 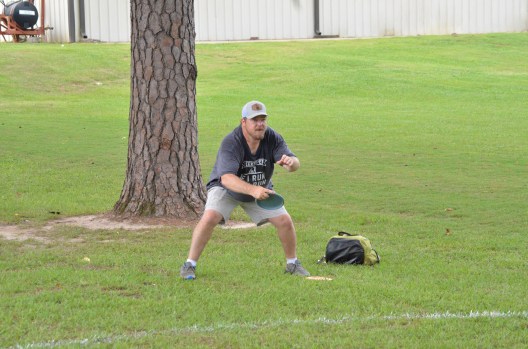 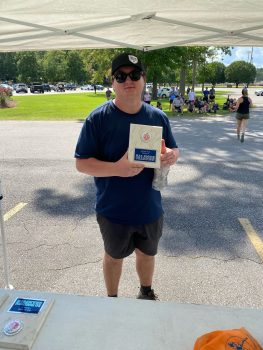 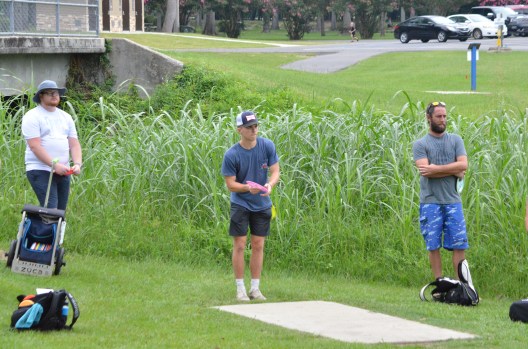 Players gauging the distance on the hole. (CAREY REEDER | ADVERTISER) 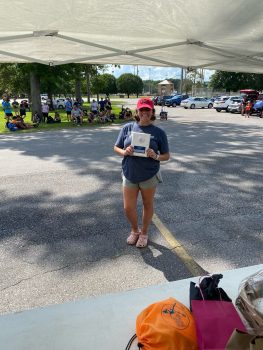 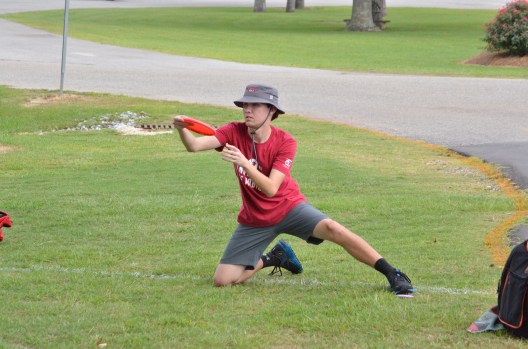 A player gets precise on his throw. (CAREY REEDER | ADVERTISER) 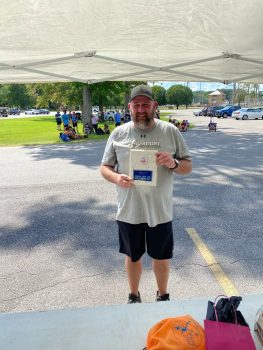 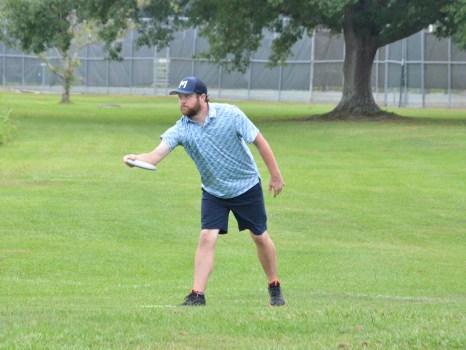 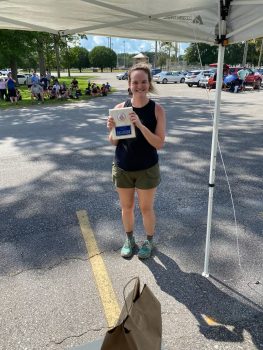 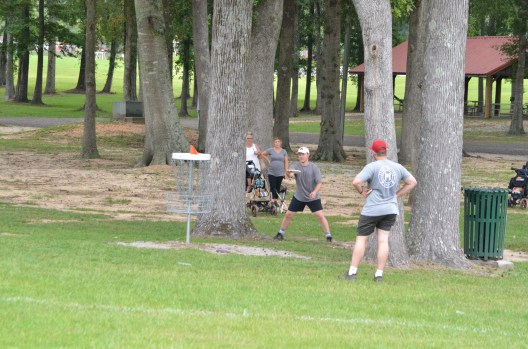 Two players finish up on a hole. (CAREY REEDER | ADVERTISER) 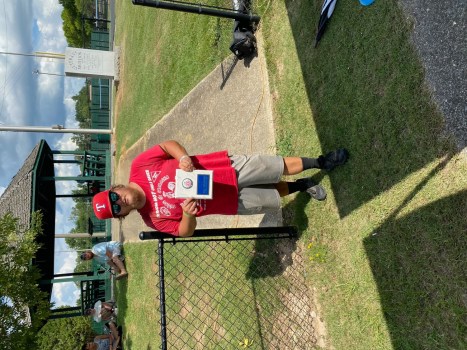 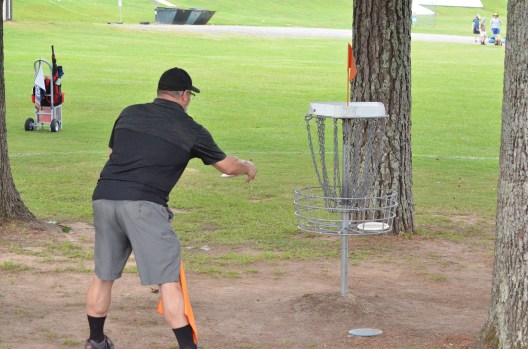 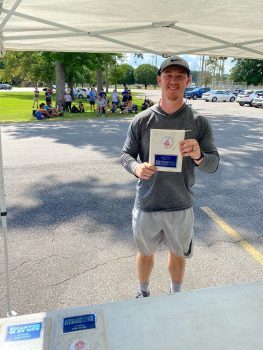 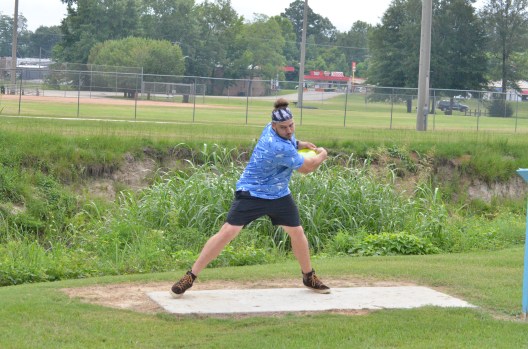 A player tees off from the tee box. (CAREY REEDER | ADVERTISER)

The second annual 2022 Peach City Classic was held at Clanton City Park on July 30 with over 85 disc golfers flocking to the tournament.

The two-round tournament saw 87 of the 88 players who signed up attend the event, and the player’s score from both rounds were combined to make their final tally.

Caleb Byers took home the male intermediate division posting a tournament best 19 under par for a total of 95. Austin Gate, Dakota Steele and Clanton’s Jason Harley finished in a tie for second place two strokes behind Byers with a total of 97.

Chandler Smith from Dora won the male novice division with a 19 under par performance for a total of 95 as well.

Jonathan Haley from Calera won the male advanced division with an 18 under par score of 96. He edged out Clanton’s D.J. Hines who finished second 12 under par for a total of 102.

Mabrey Marsalis from Calera won the women’s advanced division just four months after having a child. She posted a 1 under par for a total of 113.

Olivia Scott from Alabaster took home the other women’s division, the novice, with a total score of 136.

Jason Swam from Birmingham won the male master’s 50+ division with a 9 under par for a total of 105.

Payton Wasden took home first place in the male recreational division with a 12 under par total of 102. He edged Jerod Brown and Clanton’s Brian Jones who finished tied for second place with a score of 105 at 9 under par.

“I have heard nothing but great feedback, we have had a couple messages from people just saying they were happy with how it went again, and they are looking forward to more (events) this year and are definitely coming back next year,” Hines, coordinator of the tournament, said. “I was excited to see the new disc golfers we had this year as well as the ones who are always there to support us as well.”

While all the division winners were from Alabama, there were many out-of-state players coming from as far as Colorado and Illinois.

Hines said there was really competitive disc golf throughout all the divisions and that was seen with the close finishes in a number of the divisions. Players began check-in at 7 a.m. and received a players pack for attending the tournament. The players pack featured a premium plastic disc with the tournament logo on it, a water bottle, a hat, a clay sack to dry hands and a mini disc marker.

“Everyone was super happy with their player packs,” Hines said.

Many businesses in Chilton County donated items for the raffle that was held after or made donations to help the event go on without a hitch. Hines wanted to thank those businesses for helping make the tournament possible.

“Overall it was a great event,” Hines said. “Players complimented the course, and everything being laid out well and being clean and upkept. That is a big shout out to our city park workers that help us maintain that facility.”

The next disc golf event in Chilton County will be the Raleigh’s Place Flex Start Charity Event at the Raleigh’s Place course on Sept. 17. The C-tier event will directly benefit the Raleigh’s Place mission. The flex start will allow players to show up between 8:30 a.m.- 4:30 p.m. and do their round. Hines is also trying to setup a scenario where players can donate $5 and try to improve their score.

Details and registration for the event can be found at https://www.discgolfscene.com/tournaments/Raleighs_Place_Charity_Event_2022.

The Clanton fall disc golf league will begin on Sept. 11 and will be on Sundays at 2 p.m. at Clanton City Park.