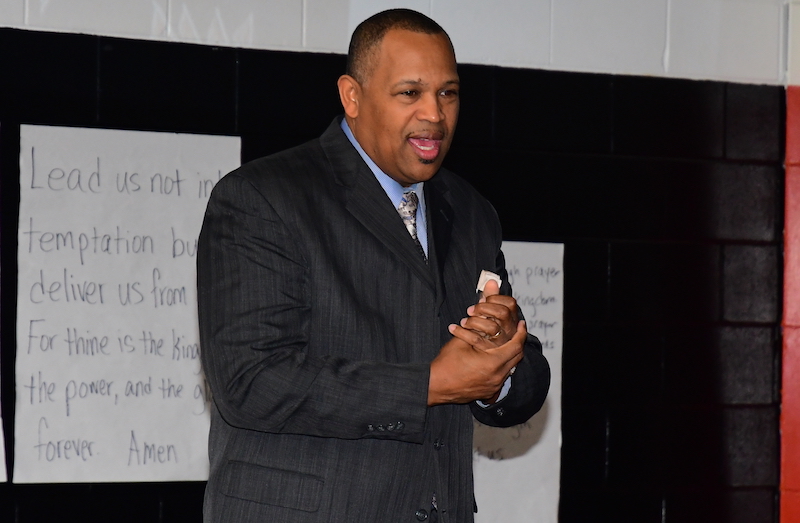 Dr. Greg DeJarnett talked to students about what it takes to be successful. (JOYANNA LOVE | ADVERTISER)

You matter and can be successful was the message Dr. Greg DeJarnett wanted to get across to YMCA of Chilton County summer campers on July 29.

DeJarnett spoke briefly of the things he was able to do while working for the Alabama Department of Education and the Alabama Emergency Management Agency. He showed the campers pictures of meetings and presentations he had been a part of with leaders and educators throughout Alabama.

He asked students what they thought he needed to accomplish these things. Students responded with hard work, dedication, good speaking skills, determination and leadership.

“You all one day are going to be in a position just like Mr. Greg and just like some of those important people that you saw on those slides,” DeJarnett said.

He told students if they listen to their teachers and parents, “the sky is the limit on what you can become.”

DeJarnett recounted how he had moved around and lived in different countries as a child because his father was in the military.

Several colleges offered him basketball scholarships, but circumstances beyond his control determined where he ultimately attended.

“It is not where you come from,” DeJarnett said. “It is where you end up … Don’t see your importance or irrelevance as connected to the place which you are born or live. Important people of all walks of life have come out of Clanton and Chilton County.”

DeJarnett attended the University of Montevallo, where he was an All-American in basketball. After graduation, he became a teacher and coach. Later, he went to work for the state department.

He emphasized the importance of being “mentally and physically tough” to be successful.

As difficult as success is to achieve, DeJarnett said maintaining a level of success is also difficult because “there are going to be things working against you to maintain the success. That’s where you have to be tough.”

He encouraged the campers to remember that they are just as important as the person sitting next to them.